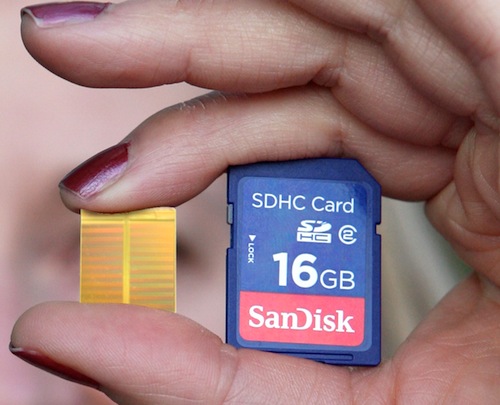 SanDisk Corporation today announced it has begun production shipments of flash memory cards based on the company’s advanced X4 flash memory technology. This innovative new technology holds four bits of data in each memory cell, twice as many as the cells in conventional multi-level cell (MLC) NAND (2-bits-per-cell) memory chips.

“The development and commercialization of X4 technology represents an important milestone for the flash storage industry,” said Sanjay Mehrotra, president and chief operating officer, SanDisk. “Our challenge with X4 technology was to not only deliver the lower costs inherent to 4-bits-per-cell, but to do so while meeting the reliability and performance requirements of industry standard cards that employ MLC NAND. Our world-class design and engineering team has applied its deep experience with high speed 2 and 3-bits-per-cell flash chip designs and collaborated closely with our leading design partners to develop and perfect new and powerful error correction algorithms to assure reliable operation. This intensive multi-year effort has generated powerful new patents and know-how, and demonstrates SanDisk’s relentless drive for innovations that result in the ever expanding use of flash storage in consumer applications such as music, videos, photos, games and numerous third party applications.”

“The shipment of 4-bits-per-cell technology is a necessary evolution for the industry,” said Joseph Unsworth, research director, Gartner. “Enabling this technology in mainstream products demonstrates a cost advantage in the flash memory industry that considers 2-bits-per-cell in a memory device as standard. The NAND industry continues to see a rapid pace of innovation, and adoption of this technology will be essential to remain competitive.”

SanDisk’s Advanced Development Efforts
SanDisk pioneered the removable flash memory storage industry since the company’s inception in 1988. The company continues to lead the industry with advancements in MLC and controller technology with the development of 2-bit, 3-bit and 4-bit-per-cell and 3D technologies.

Tel Aviv University (TAU) had provided a significant contribution to the X4 advanced error correcting and digital signal processing technology, which was licensed exclusively to SanDisk by Ramot at Tel Aviv University Ltd., TAU’s technology transfer company. “X4 took five years of development at SanDisk, and the finished product is a testament to the hard work and collaboration of the parties involved,” said Dr. Ze’ev Weinfeld, Ramot’s CEO. “Once we created the basic approach, SanDisk brought this to fruition by developing its advanced X4 controller and matching it with its advanced 43nm, 64Gb X4 memory thus making full X4 product implementation possible. This highlights the benefit commercial companies may gain from cooperation with TAU, building on our pool of talent and expertise.”