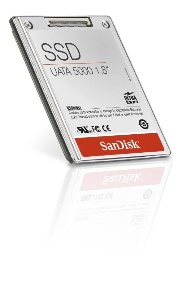 Previously, large capacity flash-based drives had been used primarily by the military, aerospace and telecom industries, which demanded high performance and reliability under challenging environmental conditions. But now the declining cost of NAND flash memory has made SSD a viable and economically attractive alternative to existing technologies in a wider variety of applications, including mobile PCs aimed at enterprise and consumer users.

“This is an important milestone for SanDisk in our relentless quest to create new large-scale markets for flash storage solutions for consumers in the personal computing space,” said Eli Harari, SanDisk CEO. “The 32-gigabyte SSD that we are announcing today represents the fifth generation of flash-based solid state drives developed by msystems, which we recently acquired. The 32GB SSD has been made commercially viable through SanDisk’s technology leadership coupled with msystems’ tremendous experience and IP, which are captured in the high-performance, low-cost system controllers that distinguish this product.

“Once we begin shipping the 32GB SSD for notebook PCs, we expect to see its increasing adoption in the coming years as we continue to reduce the cost of flash memory. When these SSD devices become more affordable, we expect that their superior features over rotating disk drives will create a new consumer category for our retail sales channels worldwide,” said Harari. It is projected that inclusion of the SanDisk 32GB SSD in a notebook PC could increase the end-user price by around $600 in the first half of 2007, he added.

The SanDisk SSD announced today achieves a sustained read rate of 62 megabytes (MB)(ii) per second and a random read rate of 7,000 inputs/outputs per second (IOPS) for a 512-byte transfer(iii) – more than 100 times faster than most hard disk drives. Taking advantage of this performance, a laptop PC equipped with SanDisk SSD can boot Microsoft Windows Vista™ Enterprise in as little as 35 seconds(iv). It also can achieve an average file access rate of 0.12 milliseconds, compared with 55 seconds and 19 milliseconds, respectively, for a laptop PC with a hard disk drive(v).

Another advantage of SanDisk SSD is its extremely low power consumption rate compared to the hard disk drive: 0.4 watt during active operation versus 1.0 watt(vi) . This is particularly important to extend the battery life for the benefit of enterprise road warriors. These results enable new operating systems, such as Microsoft Vista™, to provide mobile PC users with a superior overall system experience.

“There has been a huge increase in demand for NAND flash memory over the past few years from consumer devices such as digital cameras, MP3 players and mobile phones,” said Robert Gray, analyst with IDC, based in Framingham, Massachusetts. “There are dramatically higher bit capacities and lower prices, so the technology is now well positioned to be the foundation for new generations of potentially disruptive solid state drives. Enterprise mobile PC users will find the high performance and low power consumption especially attractive,” he added.

SanDisk SSD 1.8-inch 32GB solid state drive is now available for original equipment manufacturers. It is the first in a range of solutions that SanDisk will be offering to bring flash to the mainstream mobile PC market.

Amos Marom, vice president and general manager of the embedded division at SanDisk, is scheduled to deliver a presentation at Storage Visions 2007 on Jan. 7 at 11:45 a.m. at the Flamingo Hotel in Las Vegas. There, he will explain the benefits of SanDisk SSD for the notebook PC market. Furthermore, a demo of SanDisk SSD can be seen during the Consumer Electronics Show at SanDisk Booth 36206, South Hall 4 in the Las Vegas Convention Center. More detailed information on SanDisk SSD is available on line at http://www.sandisk.com/ssd.

SanDisk is the original inventor of flash storage cards and is the world’s largest supplier of flash data storage card products using its patented, high-density flash memory and controller technology. SanDisk is headquartered in Milpitas, California, and has operations worldwide, with more than half its sales outside the U.S.

SanDisk, the SanDisk logo and TrueFFS are trademarks of SanDisk Corporation, registered in the United States and other countries. Other brand names mentioned herein are for identification purposes only and may be the trademarks of their respective holder(s).