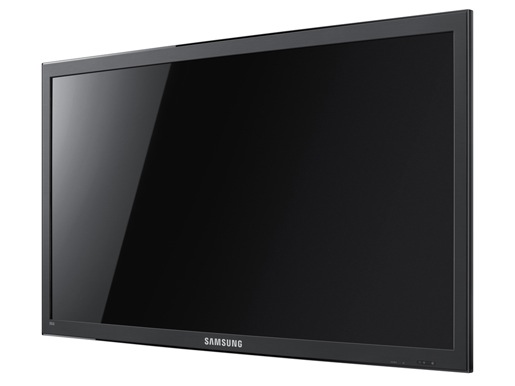 Samsung has launched the world’s first eco-friendly and large format information display (LFD) incorporating LED backlighting technology. Samsung is introducing the EX series which is the world’s thinnest LFD suitable for showing large advertisements, and is available in 40-inch, 46-inch and 55-inch models, and also has the option of a built-in PC. The series are the result of the display market leader’s ambitious project to become the world’s first to launch LED LFD.

The new LED LFDs are much better than conventional LCD displays in terms of electricity consumption, design, image quality and efficiency, and they are expected to significantly change the landscape of the advertising display market.

“The EX series will have an innovative impact on the large format information display market with their eco-friendly and highly efficient options, impressive image quality and sleek design,” said Jin-Hwan Kim, executive director in charge of Samsung Electronics’ Visual Display Division. “Building on their first launch, we will continue to be at the forefront of the market with more user-friendly solutions and advanced technologies.”

The EX series, which consume significantly less energy than the existing models, are green products with Energy Star 5.0 certification. By incorporating LED technology, these models use up to 40 percent less electricity than LCD displays and produce less carbon dioxide and fewer hazardous substances. In addition, the option of a built-in PC eliminates the need to purchase an additional PC, resulting in higher efficiency and less maintenance cost.

The EX series also boast extreme thinness and lightness, which make them much easier to use. They are 35-to-40 percent lighter than other large information displays of the same size at about 15 kg (based on 46-inch), differentiating themselves from the conventional heavy and thick advertising displays. Unlike the existing displays that take several people to install, the newest series can be installed conveniently and quickly.

Samsung has set the EX series apart by applying advanced technologies, which have not been used in conventional large displays, but provide a better user experience. The RJ45 port enables you to control the displays through a LAN cable wherever you are. The smart scheduling function, allows you to turn on and off the display, adjust the volume and set input sources by simply using the OSD.

The EX series is a perfect mixture of Samsung’s display technology and an eco-friendly concept which improves user convenience that will lead to the standardization in the display market.