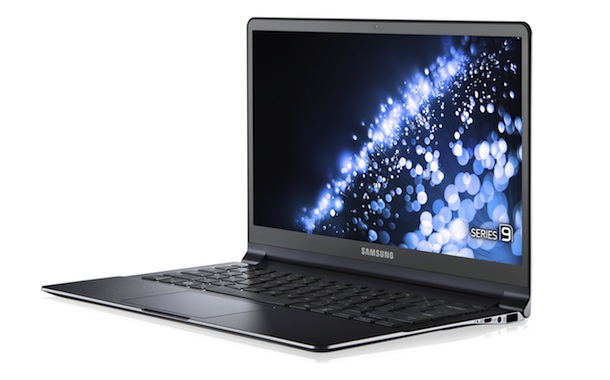 Samsung just released the 13.3-inch Series 9 Premium Ultrabook with Full HD (1920×1080) resolution, Intel Core i7 processor and 128GB SSD. In addition, it offers a SuperBright display (300 nit), making it up to twice as bright as standard notebook screens. The Series 9 reproduces up to 16 million colors, making it ideal for viewing photos and videos. The wide viewing angle and matte display allow users to appreciate the rich picture quality in all lighting conditions, both inside and out.

Weighing only 2.5 pounds and measuring just a half inch thin, the Series 9 can effortlessly be carried anywhere. The build is nearly seamless, using an aluminum single shell body and featuring the well-known Series 9 hallmark polished edge. Key components such as the display panel, keyboard, motherboard, cables, fans and battery have been customized with precision to fit into the Series 9’s ultra-thin body. Additionally, the Series 9 has been sand-blasted for fingerprint resistance, keeping it pristine at all times.

Powerful internal components, including an Intel Core i7 processor and 128GB SSD, ensure rapid startup and load times that enable users to access their content and applications nearly instantly.

The Series 9 features Samsung’s Fast Solutions technology, allowing the laptop to boot in less than 10 seconds and resume from sleep nearly instantly, allowing users to rapidly pick up where they last left off.

The Series 9 also features an integrated Intel HD Graphics 4000 chipset which, when combined with the Full HD screen, makes this the ultimate laptop for consuming multimedia.

For maximum on-the-go connectivity, the Series 9 offers up to 5.8 hours (Mobile Mark 2012) of battery life, so users can stay powered all day without needing to seek out a power source. The combination of Samsung’s PowerPlus charging technology and an advanced Lithium-Polymer battery gives the Series 9 battery a lifespan that is up to three times longer than a conventional battery.

Price and Availability
The Samsung Series 9 Premium Ultrabook with Full HD resolution is available now for $1,399.99.

Samsung Series 9 -- Now This Is an Ultrabook

Mashable9 years ago
You Are Here