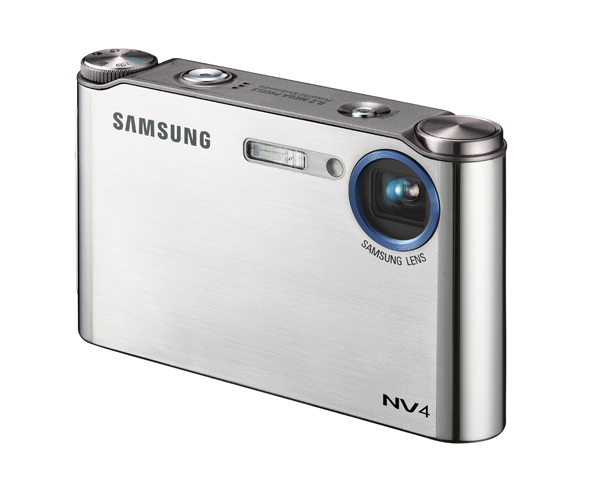 Samsung is proud to announce the NV4 – the second digital camera in its flagship NV-Series to feature PMP technology, which enables users the ability to enjoy movies, videos and even their favorite music while on-the-go.

The NV4 packs an eight mega-pixel sensor in a stylish and ultra-compact stainless steel body, measuring a mere 3.7″ x 2.2″ x 0.7″. This slim-styled shooter also features a high-quality, non-protruding, 3x optical zoom NV lens, which will help capture amazingly clear and detailed images. To help compose their shots, review their images, or enjoy video clips and movies, shooters can take advantage of the NV4’s large 2.5″ LCD screen, which will automatically brighten or dim depending on the current lighting situation. For reviewing and sharing images with others, the NV4 also boasts an intuitive Multi-Slide Show. With Mutli-Slide Show, end-users can playback their images using five different slide transitions and can also have their images set to scroll to the camera’s preloaded music or their own favorite MP3 files.

“Samsung first brought PMP technology to the NV-Series in 2006 with the introduction of NV3, and since then, PMP has truly resonated with consumers,” said Stewart Henderson, Vice President Marketing, Samsung Opto-Electronics America. “Like all of Samsung’s PMP capable digital cameras, the NV4 is an all-in-one solution geared towards simplifying the digital lifestyle of today’s tech connoisseur, giving he or she the ability to carry just one electronic device, not several gadgets like they currently do.”

In addition to PMP, the NV4 also features Samsung’s innovative World Tour Guide function, which provides travel information covering 4,500 regions in 30 countries– helping users to plan trips and find their way while on the road.
In keeping with the NV-Series’ philosophy of encouraging users to get the most out of their camera’s robust functionality, Samsung has included a new, secondary Photo Style Selector (PSS) dial, which represents a revolution in both design and functionality. Located on top of the NV4’s slim-styled body opposite the standard mode dial, the PSS dial allows users to set the NV4 to a designated shooting mode. By empowering the shooter’s thumb, the PSS dial brings a host of creative effects to the fingertip, allowing the user effortless access to seven types of color profiles, including Soft, Vivid, Forest, Retro, Cool, Calm and Classic. 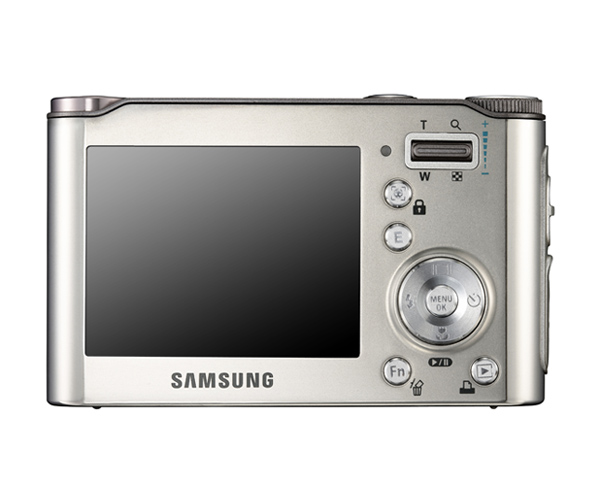 When setting the camera to PMP mode, NV4 users can easily listen to their favorite MP3 files or watch their favorite video content on the camera’s large, 2.5″ high-resolution display. The bundled Digimax Converter software seamlessly converts the user’s MPEG, AVI, MOV, WMV and ASF files for viewing on the NV4. For music on-the-go, the software can also convert MP3 and WAV audio files in several simple steps. The innovative software also allows users to view subtitles, adjust the screen size and crop and stretch the image to fit the screen as desired. To listen to videos or music, the NV4 features a 2.5mm headphone port and external speaker boasting SRS 3D acoustic technology.

The new NV4 also features i-movie mode, which offers users high-resolution SVGA (800×592) MPEG-4 video and advanced editing controls. By using the camera’s Successive Recording mode, users can pause, and then resume filming of video clips without having to save the clips as individual files. Additionally, users can operate the camera’s optical zoom while filming and can engage a movie stabilizer to compensate for unwanted camera movement and subject blur.

In low-light situations, shooters can rest assured that their images will come out sharp and clear because the NV4 comes equipped with Samsung’s improved DIS (Digital Image Stabilization) image stabilization system and an ISO equivalent of 1600. When engaged, DIS helps to minimize the effects of shaky hands and ensures that the best shots are captured even in dimly lit conditions.

Shooters can also take advantage of the camera’s numerous user-friendly features, including its Face Detection and Self Portrait modes. Face Detection makes taking pictures of family and friends a snap as it automatically detects up to nine faces and adjusts focus and exposure to ensure better composition and image quality — all the user needs to do is point and shoot. Self Portrait mode is a unique functionality that takes the guessing out of taking a self portrait. By utilizing Face Detection technology, the NV4 automatically detects the user’s face, adjusts focus and exposure, and will only allow a photo to be taken if the subject is centered in the frame.

With 14 scene modes to choose from, including Night, Portrait, Children, Landscape, Close-Up, Text, Sunset, Dawn, Backlight, Fireworks, Beach & Snow, Cafe, Food, and Self Portrait, shooters can effortlessly adjust the camera and capture the best image possible in any setting. 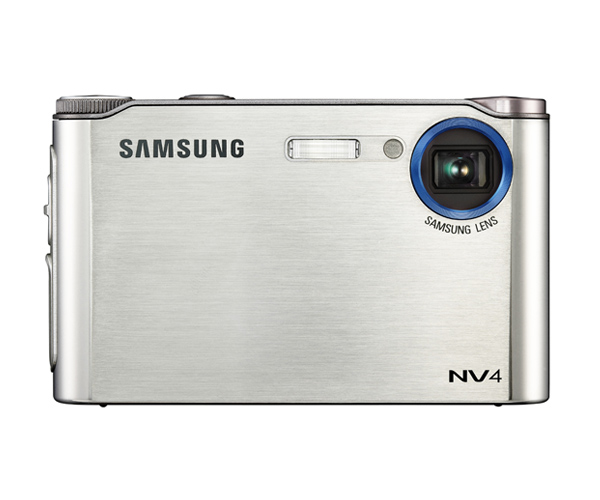 For full specifications and hi-res images visit the Samsung Camera website at: www.samsungcameraUSA.com