Samsung today announced Galaxy Note7, a 5.7-inch water-resistant (IP68) high-end smartphone with Intelligent S-Pen, VR, biometric authentication including iris scanning, and immersive entertainment features. It will go on sale in the United States on August 19; preorders begin August 3 with an exclusive offer for a free Gear Fit2 or 256GB microSD.

The phone features a gorgeous, curved QHD Super AMOLED screen delivering a bold and immersive picture. It is ready to stream HDR video, enabling a cinema-like experience including super bright colors and incredibly deep black, which ensures users get the full experience that the filmmaker intended.

By pairing the Galaxy Note7 with the new Gear VR powered by Oculus, users can experience premium virtual reality, anywhere. The phone can also be used with the new high-resolution (3840 x 1920) Gear 360 camera to capture, edit and share 360-degree images and videos on the go. These memories can then be shared with friends via platforms including YouTube 360, Facebook or Samsung VR, the company’s premium virtual reality service, and can be relived with the ultra-immersive Gear VR. 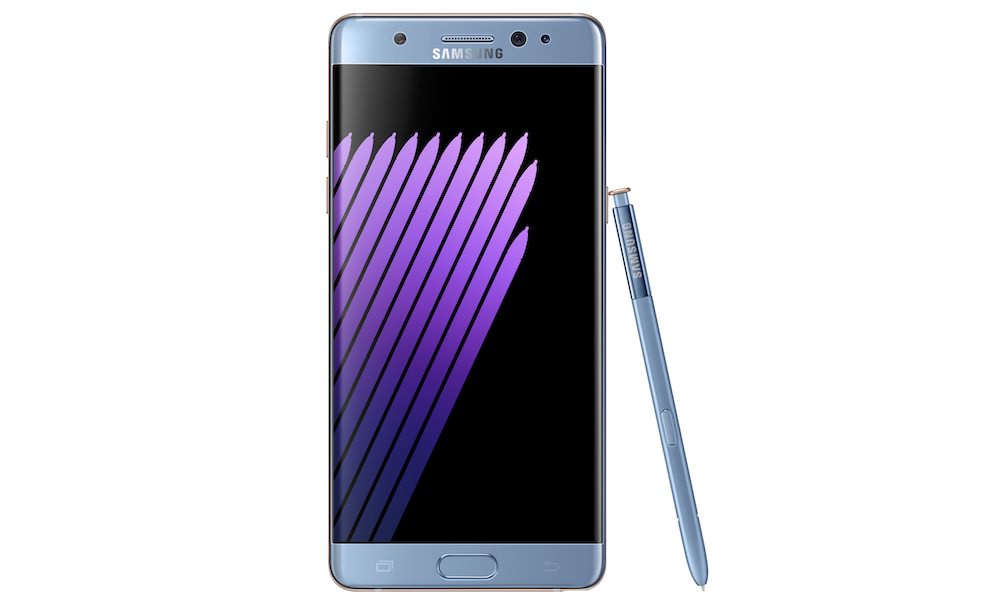 The enhanced Galaxy Note7 S Pen is more than just a writing tool – it is the gateway to getting more done efficiently and accurately. Users can bring ideas to life the moment inspiration strikes, without unlocking the screen, by using Screen off Memo and simply pinning the memo to the Always On Display. The S Pen also gives users the ability to easily create and share GIF animations with Smart Select. In addition, the new Air Command functions, including Magnify and Translate, enable users to zoom in on the screen or convert languages with a simple hover of the S Pen. It is even easier to access the best of the S Pen’s creative abilities with Samsung Notes, the unified app allowing users to jot down handwritten notes, draw, or edit memos from one location.

Coupled with Samsung Knox, a defense-grade security platform, Galaxy Note7 provides heightened security and privacy options, with highly advanced biometric authentication, including fingerprint scanner and iris scanning technology, new to the Note series. The Galaxy Note7 offers more authentication options that can be used interchangeably depending on how people use their phones, wherever they are, or whatever they are doing.

The phone implements Secure Folder – a separate folder on the phone that has an extra layer of authentication to keep private and personal information safe. In the future, the iris recognition technology will be used to authenticate secure purchases that are made with Samsung Pay. The Galaxy Note7 will support Samsung Pass at a later date, bringing authentication such as iris scanning and fingerprint recognition to apps and services.

Every edge, surface and detail of the design has been refined to provide a comfortable grip, easier one-handed operation, and durability with Corning Gorilla Glass 5. Although the Galaxy Note7 features a large screen, the unique front-to-back symmetrical dual-edge curve remains balanced and light with the sleek feel users have come to love from the Galaxy series. The powerful Edge Panel provides one-tap access to applications, news and functions.

The Galaxy Note7 is equipped with the advanced 12-megapixel camera that was introduced on the Galaxy S7 and Galaxy S7 edge. The dual-pixel sensor technology, wide aperture and fast autofocus work together to create sharp and beautiful photos even in low-light environments.

In addition to 64GB of internal memory, the Galaxy Note7 also offers expandable storage and microSD support up to 256GB2. The Galaxy Note7 is equipped with a 3,500 mAh battery and charges quickly using the new USB-C port. Recharge the Galaxy Note7 practically anywhere wireless charging is available.

A new line of Note7 accessories include the new S-View Standing Cover, a light and portable cover that can be used to prop the device at a 60-degree angle for easy viewing of content, as well as an IP68 water resistant battery backpack accessory for on-the-go charging.

In the U.S., the Galaxy Note7 will be available in Blue Coral, Silver Titanium and Black Onyx. AT&T, Sprint, T-Mobile, U.S. Cellular and Verizon Wireless will carry the Galaxy Note7 in stores beginning August 19, with pre-orders starting on August 3, 2016.

Also, for a limited time, consumers who buy the Galaxy Note7 or Galaxy S7 edge can get a free Gear Fit2 or a Samsung 256GB memory card to enhance their device. Consumers can also get $20 in rewards when they make their first qualifying purchase with Samsung Pay. These promotions will last for a limited time only, while supplies last. Terms and conditions apply. Visit www.samsungpromotions.com for more information.

Gear VR will be available beginning August 19, with pre-orders starting on August 3, 2016 through select channels.

1 Dust and water resistant based on IP68 rating, which tests submersion up to 5 feet for up to 30 minutes.

3 The information gathered from these devices or their related software is not intended for use in the diagnosis of disease or other conditions, or in the cure, mitigation, treatment or prevention of disease. The accuracy of the information and data provided by this device and its related software, including heart rate readings, may be affected by factors such as environmental conditions, skin condition, specific activity performed while wearing the device, settings of the device, user configuration/user provided information, placement of the sensor on the wrist, and other end-user interactions.

*All functionality, features, specifications and other product information provided in this document including, but not limited to, the benefits, design, pricing, components, performance, availability and capabilities of the product are subject to change without notice or obligation.

Galaxy Note7, Gear VR, Gear 360 and all other products and accessories sold separately.

Brian Mitchell2 days ago
View This