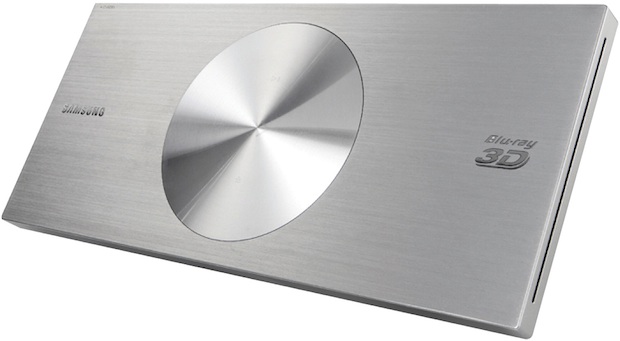 Samsung today unveiled new innovative features in its 3D Blu-ray line that offer Samsung Smart Hub via integrated 802.11n wireless and Smart Blu-ray features. Three of the new models have Samsung's innovative system-on-chip (SoC) for exceptional 3D up-conversion of movies, pictures and streaming video. Consumers can look forward to seven new products that offer a range of features to suit their lifestyle needs. The key 3D Blu-ray products being showcased by the market leader and award-winning innovator in consumer electronics include:

All the new models epitomize Samsung's 3S concept design philosophy — symmetric, slim and slot-in — and enhance the stylish elements in any home. The units are designed as symmetric products, with all the major functions placed in the middle so that using the device is easy and convenient. The lack of moving parts in the slot-in method for loading disc media also makes the unit quieter and more efficient than those with loading trays. The models are thin and designed to complement Samsung TVs. Samsung's premium Blu-ray line-up also includes advanced Smart Blu-ray features — such as AllShare and Smart Hub, which includes Your Video, Search All and Samsung Apps — that make it even easier for people to access and share content that speak to their passions.

The entire line will also offer Samsung's new patented One Foot Connection feature when used in conjunction with the Samsung wireless router. During the initial set-up of the router, users simply need to put the Blu-ray and other compatible devices within one foot of the router to establish a connection; the devices can subsequently be moved to any part of the home while still maintaining this connection

World's Thinnest Blu-ray Player
As the world's slimmest Blu-ray disc player, the space-saving, wall-mountable Samsung BD-D7500 (photo above) packs industry-leading features into its 0.9-inch height without compromising picture quality. It has innovative 2D-to-3D conversion capabilities that enable customers to enjoy a 3D experience with pictures, movies and streaming video. Powered by Samsung's innovative video processor, the BD-D7500 is loaded with cutting-edge video picture quality enhancement algorithms and various high definition codecs. The processor's exclusive conversion engine can also up-convert content, including streaming content, to HD so customers get the best images and performance from their HDTVs. All these content sources, plus the unit's built-in Wi-Fi and Smart Blu-ray features, make for virtually limitless playback options.

Additionally, the BD-D7500 connects easily to other devices without wire clutter. The DLNA-certified player features game-changing connection methods, including Samsung's patented One Foot Connection, which allows devices to also be accessed and controlled via the BD-D7500. The new Blu-ray player also comes with one HDMI input connection.

Start up time on the BD-D7500 has been slashed to three seconds with Samsung's new Ultra Fast Play. This significantly reduces the start time by 80 percent when compared to 2010 models, and makes loading content on the BD-D7500 one of the fastest in the industry. 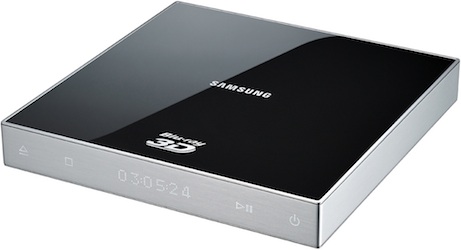 Compact and Unique Minimalist Design
Samsung's unique, minimalist design for the BD-D7000 includes a hidden slot for disc loading that pops up from the center of the unit. It also has a stylish silver metal casing that wraps around the compact, square BD-D7000.

This 3D Blu-ray player has many of the features of the BD-D7500, including 2D-to-3D conversion, full HD up-conversion, Ultra Fast Play, One Foot Connection, DLNA certification, integrated Wi-Fi, Smart Blu-ray features and a single HDMI output.

The BD-D6700 also has 3D conversion, full HD up-conversion, Ultra Fast Play, One Foot Connection, DLNA certification and integrated Wi-Fi. Additionally, iOS and Android mobile users can download a special free app so they can use their phones as a remote control for the BD-D6700.

Blu-ray Player with 3D and Wi-Fi
The BD-D6500 is a solid performer with a premium design. It offers a full HD 3D experience and access to versatile streaming services through Smart Blu-ray features. The BD-D6500 also upconverts content to Full HD and has Ultra Fast Play, One Foot Connection, DLNA certification and integrated Wi-Fi.