S1Digital's ProLine Series Media Centers (S800, P600 and P500) have all been upgraded to enable support for 3D Blu-ray and video via HDMI 1.4 and are compatible with any 3D enabled display and active shutter glasses (with a free update available in July). By enabling 3D playback capabilities now, customers can be assured that they will be ready when 3D Blu-ray movies begin shipping later this season. 3D video playback is available as standard on the S800 and as an option on the P600 and P500. 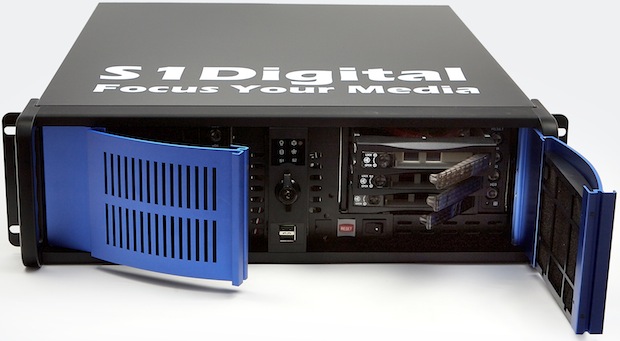 S1Digital's flagship S800 Media Server, in addition to supporting 3D Blu-ray, gets a massive upgrade to a full ten terabytes of internal storage on six hot-swap hard drives, and is powered by a hardware RAID controller, latest Intel Core i7 processor and runs on Windows® 7 64 bit operating system.

The P600 and P500 have been upgraded to support lossless audio bitstreaming of DTS Master Audio and Dolby True HD over HDMI and “Deep Color” video output. The P600 and P500 also receive storage upgrades to two terabytes (RAID 1) and four terabytes (RAID 5) respectively of internal storage. Both also support 3D video capability over HDMI 1.4 with an optional upgrade and are powered by Intel's Core i5 processor and run Windows 7 64 bit operating system.

The P250 is S1Digital's newest member of the Media Center lineup. A small Media Center client, the P250 supports HDMI 1.3 features including lossless HD audio codecs and 1080p video output. The P250 is designed for use with S1Digital's Entertainment Server (or other ProLine Series Media Center) and offers seamless access to Blu-ray, music, photos and videos stored on a server. When used with Network TV add-on, the client can also stream live cable HDTV over a network. The P250 is powered by an Intel Core i3 processor and runs on Windows 7 64 bit operating system.

All Summer 2010 refreshed ProLine Series will be available by the end of June.