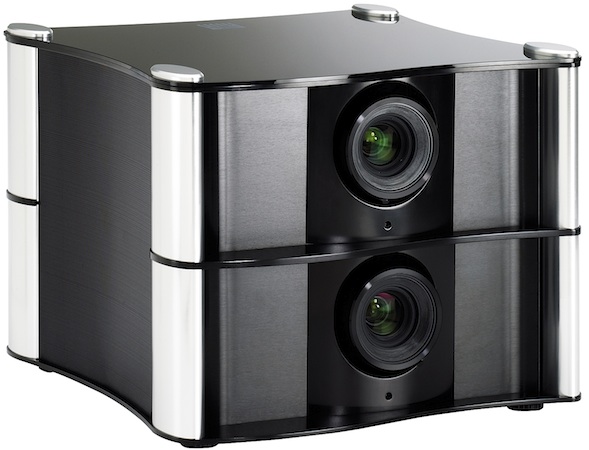 Runco® announced the QuantumColor Q-1500d lampless LED home theater projector. Building on Runco's award-winning and best-selling LED projection line, the Q-1500d has been designed to combine the revolutionary technology and benefits of the QuantumColor Series with powerhouse performance that yields an incredibly bright image ideal for larger screen sizes. As the brightest LED home theater projector available on the market, the Q-1500d maximizes the benefits of Runco's InfiniLight lampless LED illumination technology, and pairs it with the QuantumColor's revolutionary technological advancements such as Runco SmartColor, InstantOn, and an energy-efficient system that delivers must-see projection performance.

The Runco Q-1500d offers homeowners with larger theaters and screens (up to 200 inches) the ability to enjoy the benefits of an LED projector with the incredible performance of the QuantumColor Series.

The Runco QuantumColor projectors include the most astounding arsenal of color spaces achievable in front projection, including DCI, Adobe RBG, sRBG, REC 709 and REC 601, to enable exact reproduction of any content. To harness these impressive color gamuts, Runco's Personal Color Equalizer (PCE), allows the displayed colors to be individually dialed up and down for every video source and multiple personal preferences. Runco's PCE enables custom video integrators to achieve unprecedented colors that include those exactly defined by Hollywood's cinematographers and the color preferences that each individual viewer chooses for each source. To eliminate unrealistic distortion, the Q-1500d is equipped with Runco's SmartColor (RSC), a proprietary hue compensation curve and gamut mapping technology that preserves lifelike, accurate flesh tones by increasing color saturation, without sacrificing the purity of other colors. RSC enables custom installers to create color preference settings for their clients without sacrificing or adjusting other colors, which leads to unrealistic flesh tones and over saturation. QuantumColor projectors never lose color alignment as they automatically assess and adjust color calibration every time they are turned on.

The Q-lumens in the QuantumColor projectors are proven to be perceived as brighter than lamp-derived lumens, but that is not the only brightness advantage of the QuantumColor platform. The aging curve on the InfiniLight LED illumination system is much more stable than that of a traditional UHP mercury lamp, which lose significant brightness in their early hours of operation, falling to a plateau and then aging gradually to half-life, burn out, and replacement: starting the cycle over again. In contrast, Runco's lampless InfiniLight system is calibrated at every start-up and has a more gentile brightness loss curvature. This means the perceived brightness-advantage of Q-lumens is even more pronounced after 1,000 – 2,000 hours of ordinary use.

Another Runco QuantumColor benefit is InstantOn, which provides a nearly immediate projected image when turned on. InstantOn saves the homeowner both time and money, as the projector no longer needs to be left in standby mode, which consumes exorbitant power when the projector is not in use.

The Runco Q-1500d ships with Runco's upgraded, new Digital High-Definition (DHD) external video processor. The new Runco DHD4 offers the most advanced alignment in Runco history, allowing for ultra-precise installation geometries, more extreme installation scenarios, and the removal of any pin-cushion effect that can be caused by 2.35:1 scaling, improving the CineWide technology. The DHD4 now also supports control over HDMI CEC in addition to the traditional IR and the expanded RS-232 connections. And for added dealer convenience, the new web interface allows for calibration from a laptop, smart phone, Apple iPhone, or iPad, which makes installation and set-up even easier for the installer. In addition, the Runco DHD4 offers more connectivity than its predecessor, offering four HDMI inputs and three composite video connections. An additional HDMI output was added for audio and monitoring purposes.

The Q-1500d offers two lens options to accommodate nearly every theater and various screen sizes. For the ultimate in viewing flexibility and enjoyment, each model is available with Runco's exclusive, award-winning CineWide and CineWide with AutoScope technology. These technologies reproduce 2.35:1 CinemaScope movies with unparalleled accuracy and full vertical screen image height, and eliminate useless black bars.

The QuantumColor Q-1500d will be available in Q4 2010 with an MSRP of $39,995. Runco's QuantumColor projectors are available exclusively through the best dealers in the home theater business – the Runco authorized dealer network.