The Ricoh Theta S is a simple handheld camera that captures spherical 360-degree images and HD video. The device makes it easy for anyone to capture what is going on all around them. The camera features extra-high resolution, fully spherical photos and videos in one simple shot.

The Ricoh Theta S captures the entirety of a scene in a high-resolution photo or video, in a sleek, pocket-sized design. It records high-resolution spherical images of nearly 14-megapixels and HD video at 30fps, with a maximum recording time of 25 minutes. Its high quality images are enabled by an enlarged image sensor and wide-angle lenses that allow more light through Ricoh’s proprietary ultra-small twin-lens folded-optical system.

Spherical images can be uploaded to theta360.com, shared via Facebook, Twitter and Tumblr, and posted to Google Maps, Google+ and YouTube 360° Channel. However, Spinnable announced today users can use the Ricoh Theta S to capture and then directly upload images to the Spinnable app, which is currently available for iOS, and will soon be available for Android devices. Once in the app, the media can be moved with the swipe of a finger, or by panning, using the phone’s gyroscope. The Ricoh Theta S camera can also be purchased through the app.

Google’s Street View app also allows you to capture and publish your photo spheres instantly to Google Maps for people all over the world to explore. The app also offers the ability to shoot photo spheres and to connect to spherical cameras. This new capability to connect to spherical cameras makes it easier than ever to create Google Street View experiences. 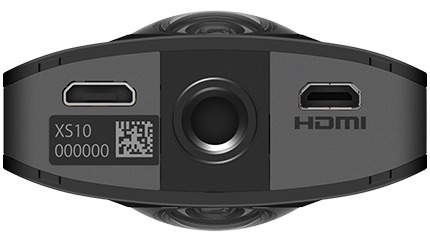 Price and Availability
The Richo Theta S is available worldwide now for $349 (or equivalent).