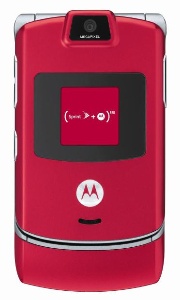 To help customers easily harness the power of Sprint’s network and unique products and service offerings during the busy holiday season, Sprint (NYSE:S) today announced the kick-off of its “Twelve Days of Power Shopping” campaign. For the first day of the series, Sprint, Motorola and (RED) are turning the traditional “Black Friday” – the biggest shopping day of the year – into “(RED) Friday” by encouraging customers to purchase a RED MOTORAZR wireless phone during the holiday season.

RED MOTORAZR V3m, which became available from Motorola (NYSE: MOT) and Sprint in early November, is a new wireless phone designed exclusively to support (PRODUCT) RED. Both Sprint and Motorola will contribute directly to The Global Fund to fight AIDS, tuberculosis and malaria with each RED MOTORAZR sold at Sprint.

(RED) is an initiative founded by Bono and Bobby Shriver to raise awareness and money for The Global Fund, an innovative public-private partnership created to finance a dramatic turnaround in the fight against AIDS. The groundbreaking initiative engages the private sector to create (PRODUCT) RED-branded products from which a portion of profits are contributed directly to The Global Fund.

“We are delighted to offer our customers RED MOTORAZR as a way to make a difference in this very important effort,” said Mark Schweitzer, Sprint chief marketing officer. “With the exclusive content available from Sprint, including live television, NFL Mobile and Sprint Music Store, purchasing the RED MOTORAZR is an easy way to help in the fight against HIV/AIDS.”

“Motorola is honored to be associated with (PRODUCT) RED, The Global Fund and now Sprint in the drive to help those in Africa affected by HIV/AIDS,” said Ron Garriques, president of Motorola Mobile Devices. “Together, we are literally placing in people’s hands the opportunity to get involved in a meaningful way.”

On Sprint’s Power Vision(SM) network, RED MOTORAZR will join MOTOKRZR™, MOTORAZR™ and MOTOSLVR™ as the only versions of these iconic handsets to offer access to:

The RED MOTORAZR V3m is one of Motorola’s thinnest multimedia phones for the CDMA network and features a refined metal housing and sculptured clamshell shape. The bold red hue of the RED MOTORAZR makes a striking statement complimenting its ultra-thin, attractive design.

Packaged with a stylish headset, the RED MOTORAZR costs $64.99 with a two-year agreement and a $90 mail-in rebate ($304.99 suggested retail price). For additional information on the RED MOTORAZR V3m, please visit http://www.sprint.com/red.

About (RED) and (PRODUCT) RED
(RED)’s primary objective is to engage the private sector in raising awareness and funds for the Global Fund to help fight AIDS in Africa. Companies whose products take on the (PRODUCT) RED mark contribute a significant percentage of the sales or portion of the profits from that product to the Global Fund to finance AIDS programs in Africa, with an emphasis on the health of women and children. Current partners are: American Express (U.K. only), Converse, Gap, Giorgio Armani and Motorola. MySpace.com is the first media sponsor in the United Kingdom. WWW.JOINRED.COM

Motorola and Sprint will collectively make a $17 contribution on the sale of each red MOTORAZR V3m phone to the Global Fund to Fight AIDS, Tuberculosis and Malaria in Africa. See http://www.motorola.com/red or http://www.theglobalfund.org/en for more details.