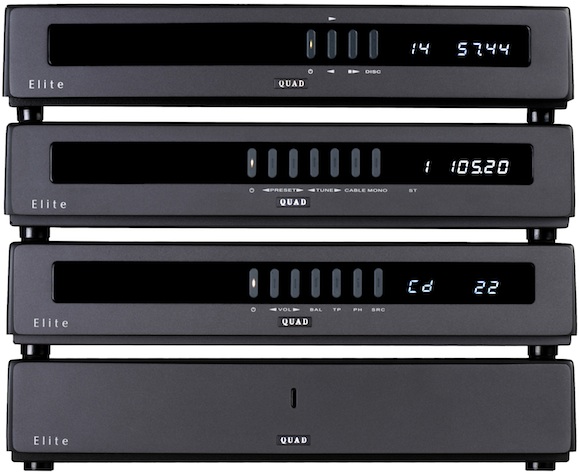 Quad replaces the highly rated 99 Series with an all-new range of components, including a CD player, radio tuner, preamp and two power amps

Quad just announced the Elite Series, a new range of audio components replacing the long-running and highly successful 99 Series, which first appeared in 1999. Like their predecessors, the Elite components are compact in size and designed with performance, simplicity and versatility firmly in mind.

Two further components will join the range by the end of the year: a second CD player that incorporates digital preamp functionality and an additional stereo power amp to replace the existing 909.

Improving Upon a Classic
In designing the Elite Series, the challenge for Quad’s engineers was to improve upon the established 99 Series without undermining the qualities that made the range so successful. Outwardly, the components are similar, retaining the midi-width aluminium casework and distinctive look of the 99 Series models, with enhanced build quality and subtly updated styling.

However, the critical changes are within. A painstaking redesign operation began three years ago, with every internal component scrutinised in turn. Through an exhaustive process of modifying, measuring, listening then modifying again, the 99 Series models gradually evolved into their Elite counterparts. Throughout this process, Quad’s original slogan — “the closest approach to the original sound” — was paramount. Only modifications that brought about a tangible improvement in sound quality were sanctioned for the final designs, with tight tolerances strictly adhered to in order to ensure perfect matching from unit to unit.

Elite System Concept
Individually, each Elite component has been engineered to perform at the top of its class. Combine them to form a complete high-performance music system and the standard they set is higher still. Their smart, understated looks and compact dimensions are both practical and pleasing to the eye, while Quad’s proprietary Quad Link and Amp Bus technologies ensure perfect synergy between every Elite component, optimising sound quality and simplifying system connectivity and control.

The Quad Link system bus is used to connect the Elite CDS CD player and Elite FM tuner to the Elite Pre preamp. It carries the audio signal in fully balanced form, plus system commands enabling all three components to be controlled via a single remote handset. Similarly, Amp Bus delivers balanced audio and control signals between the Elite Pre preamp and Elite Stereo or Elite Mono power amps. Several power amps may be daisy-chained via Amp Bus, giving the user the option to bi-amp or even tri-amp with ease. All Elite components (except the Elite FM) also provide conventional RCA sockets, for connection to components from other brands.

Every Elite component has been designed to deliver the best possible user experience. The build is solid, the controls straightforward and the sound painstakingly tuned to maximise musical enjoyment. The natural, unforced sonic scale, pace and dynamism that made the 99 Series so highly rated remains intact, imbued with even greater resolve to deliver the most captivating musical performance possible, whilst maintaining highly competitive pricing throughout the range. Quad products have always been about the musical experience, first and foremost, and never has this been better exemplified than by the performance of the new Elite Series.

Jason Greenslade, a highly experienced audio equipment engineer who has held senior positions with Arcam, Cyrus, NAD, Roksan, Soundcraft and TAG McLaren Audio, leads the design team charged with delivering the Quad Elite Series. Given the longstanding success of the 99 Series, his responsibility is considerable, yet Quad has allowed Jason and his team all the time and resources they require in order to ensure every Elite component surpasses the performance of its predecessor.

“The Elite Series represents the best solid-state component range Quad has ever produced. Listening to the Elite pre/power with the Elite CD player as its source I am struck by how clean, clear and effortless is the musical delivery of this combination. This Elite system has now taken pride of place in my listening room.”
— Peter Comeau, Director of Acoustic Design for IAG (Quad’s parent company)