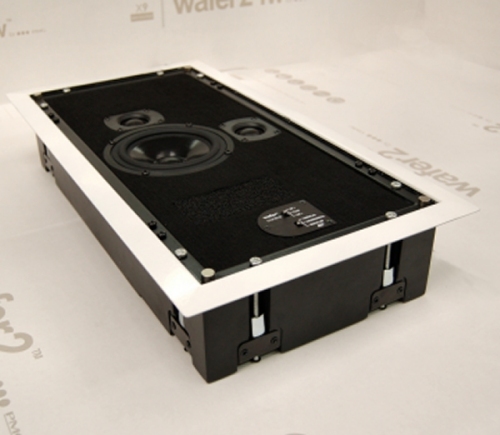 PMC are please to announce the launch of the wafer-iw series of in-wall loudspeakers, expanding their ground-breaking and award-winning ATL technology to a range of cutting-edge products ideally suited to the discerning listener and the perfect match for all contemporary installations.

The wafer-iw series is comprised of two models, available in a dedicated in-wall form to compliment the previously launched wafer on-wall models. The two models sport identical technologies only differing in bass unit size and the consequential low frequency response and maximum SPL — The wafer 2-iw contains a 6 ½ inch bass unit where the wafer1-iwcontains a 5 ½ inch.

The fidelity of in-wall loudspeakers has suffered due to unavoidable design flaws…until now. The wafer-iw installation series addresses these issues by way of numerous innovations unique to the brand with sleek unassuming style that blends perfectly into any decor.

The highly sophisticated and unique internal structure implements PMC’s Advanced Transmission Line (ATL) technology, a direct descendant from the company’s professional studio range of loudspeakers. The ultra-shallow H-Line interior of each wafer series cabinet is divided to create a long chamber, which is in turn lined with carefully chosen acoustic treatments. The result is a far louder, deeper and more clearly-defined bass extension than from any conventional design, the listener is presented with a huge, expansive sound from a modest-sized box. Sound leakage from the rear of this type of design is extremely minimal and needs no back box or treatment to the cavity.

Another unique feature is PMC’s TT Technology – Twin Tweeter technology, which by way of Steerable Image techniques, makes horizontal and vertical placement possible — both higher and lower than the listener — without limiting performance.

Standard in-wall designs are compromised by the large surface area of the wall or ceiling around them, but PMC’s acoustic specialists have developed a unique, structured and absorbent surface aptly named StealthBaffle that prevents unwanted reflections from the front baffle and the surrounding wall or ceiling, instead concentrates pure, untainted audio directly into the listening space. The two in-wall models are equally at home in a ceiling and fit virtually flush to the surface. The slim line grille and frame can be painted to blend into the chosen decor so the loudspeakers are heard but not seen.

The end results are magical. With little to distract the eye the listener can relax and enjoy a vast sonic soundscape regardless of their position; there is nothing to stand in the way of a musical performance’s true emotion or the dynamic excitement of a motion picture soundtrack.

About PMC
PMC is a UK based, world-leading manufacturer of professional monitor and audiophile speaker systems.

Such is the influence of PMC’s engineering on the audio world that the vast majority of blockbuster movies, chart-topping albums and revered classical recordings have been mixed and mastered using PMC loudspeakers. Live8, monitored on a PMC system, was watched by a global audience of two billion people and no other loudspeaker manufacturer could boast about their Emmy award for their part in Disney’s ‘Timon and Pumbaa’. Critical acclaim has also been received for PMC’s involvement in the production of nominated and Oscar winning blockbuster soundtracks such as ‘Finding Nemo’, ‘Spider-Man’, ‘Chicago’, ‘Independence Day’, ‘Jurassic Park’ and ‘Titanic’.

PMC monitor systems are in service with most of the world’s premiere music and film sound recording studios, broadcast companies, post production and audio mastering facilities. For further information and an extensive list of clients visit http://www.pmc-speakers.com