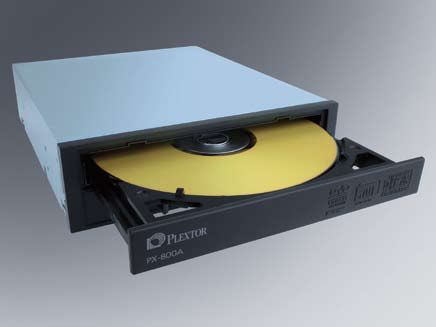 The Plextor PX-800A drive features an E-IDE ATAPI interface for easy connectivity with personal computers running the Microsoft Windows 2000/XP/Vista operating systems. The PX-800A drive also supports industry-leading 12X-speed DVD-RAM functionality for removable data storage applications. A user simply inserts a blank DVD-RAM disc and the system automatically formats the disc and assigns a driver letter. Users can drag-and-drop files, use the “save as” command, and remove the disc, which can then be read in any PC or desktop player with a drive that supports the DVD-RAM format.

“The PX-800A supports multiple data storage, audio and DVD playback, and optical disc recording applications, with faster performance across-the-board,” said Michael Arbisi, vice president of channel sales for Plextor. “The PX-800A is one of the first drives from Plextor to support the newly released Windows Vista operating system from Microsoft. Including the latest version of Roxio Easy Media Creator really makes this drive a great value for customers.”

About Plextor
Plextor LLC is a leading developer and manufacturer of high-performance digital media equipment for professionals, consumers, and enterprises. Headquartered in Silicon Valley since 1990, Plextor has introduced generations of award-winning products, including digital video converters and CD-R/RW, DVD+/-R/RW, and Blu-ray optical disk drives. Contact Plextor at http://www.plextor.com.

Plextor and the Plextor logo are registered trademarks of Shinano Kenshi Kabushiki Kaisha. Other brands and products are trademarks of their respective holders.