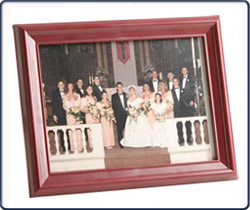 March 7, 2007: ST. LOUIS, MO — St. Louis-based HDTV antenna manufacturer Terrestrial Digital is finally starting to breathe a sigh of relief. The PF7, the company’s HDTV antenna disguised as a picture frame, is now back in stock at antennasdirect.com after three months of record breaking sales.

The company had the best type of problem on their hands beginning in December of last year. The PF7 was featured on NBC’s The Today Show, alongside big screen HDTV’s, the Nintendo Wii and Sony’s Playstation 3, as one of the best gadget gifts for guys. The problem? Within hours of the program airing, demand went above and beyond supply. It even went beyond the product orders they had placed in anticipation of the buzz.

“It’s a little bit surreal to see Matt Lauer and one of the Senior Editors at CNet.com talking about your product on national television,” Terrestrial Digital President Richard Schneider said. But when the Today Show segment ran, the reality of the situation sunk in and stormed us with more orders and demand than we could have anticipated.”

Over the course of the next three months, the company was also featured on CNBC’s On the Money, in Newsweek Magazine and in several national daily papers including the St. Louis Post Dispatch and the Boston Globe. With the increased coverage, demand for Schneider’s picture frame antenna and the company’s entire product line grew as well.

According to Schneider, the company’s natural sales cycle always tends to slow a bit just after the Super Bowl. This year’s lull has been less substantial than in previous years, but has still allowed Terrestrial Digital to replenish their supply and focus attention on their new products in the pipeline.

According to Schneider, the company plans to announce major breakthroughs in antenna design and performance research with the introduction of its Lacrosse Micron line of antennas, due out later this year. Plans are also in the works for additional indoor low profile antennas that can be disguised as other household objects.

Schneider started Terrestrial Digital in 2003, after becoming frustrated with the poor performance of several HDTV antennas he had tried. He has continued to grow the company to develop the premium products in the industry.

Terrestrial Digital is a St. Louis based manufacturer and distributor of off air HDTV antennas. The company was founded by Richard Schneider, and is widely recognized for superior products by the HDTV community. To find more information on becoming a Terrestrial Digital dealer, visit www.terrestrial-digital.com. To buy products online, visit www.antennasdirect.com.