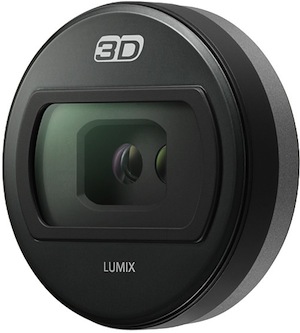 Previously, 3D shooting with an interchangeable lens system camera was possible only by using panorama systems or by combining two lenses and two CCDs. However, these systems are not ideal and have difficulty capturing moving objects. Panasonic's new 3D-capable interchangeable lens allows instant 3D shooting (35 mm camera equivalent: 65 mm, without time lag between left and right images — even when shooting objects in motion. As part of Panasonic's 3D ecosystem of 3D-capable VIERA® televisions and Blu-ray 3D Disc Players, the 3D images taken with this lens — even close-up shots — are easily viewed on Panasonic's 3D VIERA televisions.