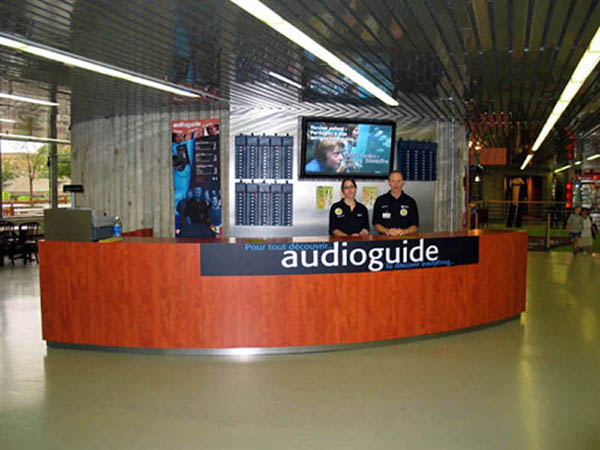 BioDome: AN OASIS IN THE HEART OF THE CITY

MONTREAL, QUEBEC, CANADA: Offering a rare glimpse into the detailed inner
workings of four complex ecosystems, Montreal’s BioDome has some major
explaining to do. Built in 1992 to coincide with the city’s 350th
anniversary, the BioDome’s nearly 70,000 square feet of exhibit space
reproduce the Costa Rican tropical forest; each of the Laurentian temperate
ecosystem’s four distinct climates; the St. Lawrence marine ecosystem that
duplicates the estuary and gulf; and the polar worlds of the Arctic and
Antarctic side-by-side for greater appreciation of the differences. Numerous
species of flora and fauna native to the ecosystems complement man-made
waterways and rock formations designed to duplicate the exact look and feel
of each.

While more than ten million visitors have already left the BioDome with a
much greater appreciation of the ecology of ecosystems, the future promises
even greater understanding thanks to a brand new radio frequency-based tour
guide system.

Installed last summer, the new guidePORT information system supplied by
Sennheiser-Canada, will make the job of educating visitors immeasurably
easier. The pre-programmed, headset-based communications system allows
hands-free access to detailed explanatory recordings, giving all visitors
much more control and flexibility with respect to how they view and learn
about each of the BioDome’s stunning exhibits.

Employing antennae, radio transmitters, receivers and pre-recorded audio,
guidePORT is a wireless visitor information system that senses a visitor’s
location and delivers – via a wearable headset/receiving unit – explanatory
audio that corresponds to exactly what’s being viewed. Unlike other systems
common to the museum environment that require user to press buttons
corresponding to their location to activate the pertinent audio, as well as
to start and stop it, guidePORT is virtually interaction-free.

In the BioDome 45 individual identifiers that trigger the receivers and
initiate a rapid download of the correct digital audio file are hidden under
exhibit pathways or in small crevices. The audio information pertaining to
the exhibits, which totals 80 minutes in all, is stored in transmitters that
cover 13 cells on the exhibit floor. As visitors walk the floor, the digital
audio delivered to the receivers changes as they move from cell to cell to
correspond to what they’re seeing.

Associated with each cell and each of five program types (French, English
and Spanish languages for adults; French and English for children), are a
base transmitter and an antenna. A total of 55 antenna units and 13
associated radio transmitters are deployed to cover the massive exhibit
area. All audio files reside digitally in the base transmitters and are
continuously broadcast into their cell.

Because the receivers are continually downloading audio pertinent to their
location, visitors are free to move from zone to zone in any pattern they
wish. As they leave one zone, the audio for that area fades, and the audio
pertaining to the new area is phased in from the beginning. The only
interaction involved is using buttons on the receiver to stop and restart
the audio and to adjust volume.

A year into using guidePORT, BioDome is making about 300 receivers available
for visitor use for a nominal fee. Receivers are chosen based on the
visitor’s preferred language, and whether or not the visitor is an adult or
child, in which case the audio is geared to their level of understanding.

Using special software features in guidePORT that precisely track visitor
movements, BioDome can readily determine the most popular exhibits and the
ways in which traffic flow can be maximized.

With guidePORT now on duty BioDome has found a way to enhance not only the
visitor’s educational and entertainment experience, but also a way to learn
more about how visitors navigate the exhibits. In short, BioDome’s job of
not only explaining but also, learning about itself and how it relates to
its visitors has gotten a whole lot easier.

Established in 1945 in Wedemark, Germany, Sennheiser is the acknowledged
world leader in microphone technology, RF-wireless and infrared sound
transmission, headphone transducer technology, and most recently, in the
development of active noise-cancellation. Sennheiser Electronic Corporation
is the U.S. wholly-owned subsidiary, with headquarters in Old Lyme,
Connecticut.