Nokia introduced its third and most affordable Windows Phone 8 smartphone, the Lumia 620, which is powered by Qualcomm’s Snapdragon S4 Plus processor with a 3.8-inch touchscreen. The phone features a 5-megapixel camera and VGA front-facing camera. A Cinemagraph lens adds simple animations to still photographs, while Smart Shoot creates a single, perfect shot from multiple images, even removing unwanted objects from the picture.

With NFC support, the Nokia Lumia 620 can easily pair with NFC-enabled accessories like the JBL PlayUp Portable Speaker for Nokia. Open and secure NFC-connectivity makes it possible to share and receive content by tapping with compatible devices, or make secure payments using the Wallet application in Windows Phone 8.

Adjustable Live Tiles update direct to the Start Screen. People Hub pulls together contact information from multiple address books and social networks into a single location, making it easy to stay in touch with friends and set up contact Groups and private Rooms for sharing. From the Me Tile people can check in to their location, post an update, set chat status, see what’s new and monitor notifications across Facebook, LinkedIn and Twitter. Windows Phone 8 also includes Xbox Live, Microsoft Office, 7GB of online SkyDrive storage and faster, safer surfing with Internet Explorer 10.

The Nokia Lumia 620 uses a new dual-shot color technique to deliver a variety of striking color and texture effects. Dual-shot adds a second layer of colored, transparent or translucent polycarbonate on top of a base layer to produce secondary color blends and depth effects. With seven different exchangeable shells to choose from, people can adapt the look of their Nokia Lumia 620 to their own personal taste and style.

Price & Availability
The Nokia Lumia 620 will be available in a range of colors (may vary by country) including, lime green, orange, magenta, yellow, cyan, white and black for $249. It will begin selling in January 2013 in Asia, followed closely by Europe and the Middle East before expanding further. 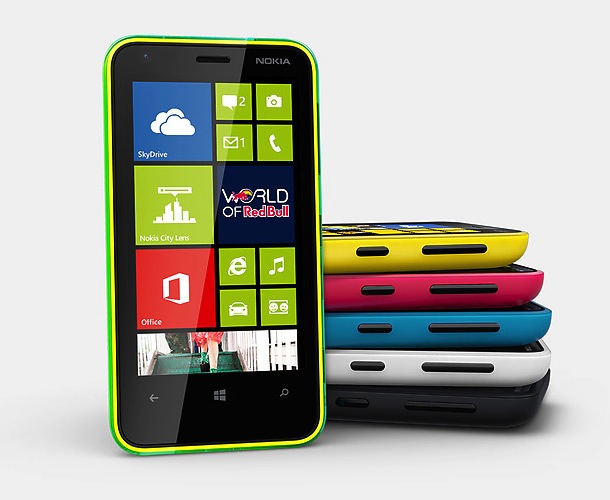 Reviews Around the Web: nokia lumia 620