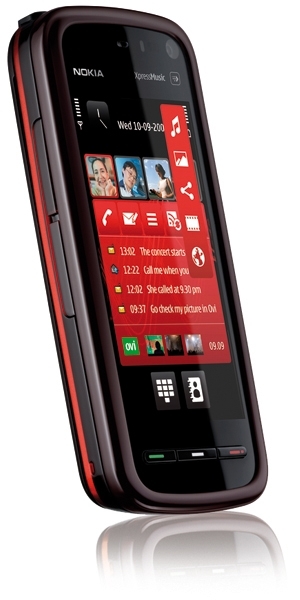 The recently released Xpress Music 5800 touchscreen phone from Nokia has now been launched as a Pay As You Go phone in the UK, after first launching on O2, Orange and T-Mobile pay monthly deals and being joined by an exclusive blue edition on Vodafone this new music inspired touchscreen phone can now be bought without having to sign up to an expensive contract deal.

The Nokia 5800 Pay As You Go phone is also ideal for those with credit problems as there is no need to pass a network credit check, it also means that consumers can now buy the 5800 as a present for others as the handset can be registered by the recipient.

The Nokia 5800 XpressMusic has a 3.2 inch touchscreen and the latest S60 interface, especially adapted for touch control. As the XpressMusic name suggests, this is a fantastic music phone. Supporting microSD cards up to 16GB there’s plenty of storage for music and video files.

There’s an accelerometer, a standard 3.5mm headphone jack, FM radio and a TV out port for viewing videos or playing the built-in games on your big screen.

The camera on the Nokia 5800 has 3.2 megapixels and a dual LED flash. This might not sound impressive but it has a high quality Carl Zeiss and that makes all the difference. Photographs are noticeably better compared to those taken with an iPhone or with an older generation cameraphone. The built-in web browser is excellent.

The screen renders quickly and web pages can be dragged with a finger swipe or zoomed with a double tap on the screen. The Nokia 5800 has 3G, HSDPA and Wi-Fi. There’s also a built-in GPS receiver and a special touchscreen version of Nokia Maps also to be found in the Nokia N97 is pre-installed. Don’t forget it’s also a phone! The on-screen numeric keypad makes dialling easy and there’s a choice of on-screen QWERTY keyboards or handwriting recognition for text input.