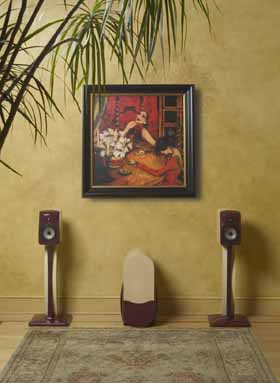 ORLANDO, FL, February 24, 2005 (EHX Booth #837; also on display at Crowne Plaza Hotel, 12000 International Drive, Geartner Associates Demo Room) — Following over six months of accolades for what will be the most accurate speaker in the home audio industry, it was confirmed today that the NHT Xd DEQX Calibrated DSP speaker corrected system will ship to select specialty retailers in late-March 2005.

“In all my time in the consumer electronics industry, this is easily the most exciting and radical product introduction I’ve had the pleasure to shepherd, so it’s absolutely essential to have every last detail repeatedly reviewed and tested before letting the first NHT Xd package out the door,” commented Chris Byrne, Managing Director of the Rockford Home Group, parent company of NHT. “We’re working closely with our partners, DEQX and PowerPhysics, to ensure that our end-users achieve the same remarkable level of accuracy as that experienced by the media who sampled the system earlier this year.”

NHT Xd, which will be demonstrated during EHX at the Crowne Plaza Resort, 12000 International Drive, Geartner Associates Room, is the result of the combined efforts of three companies — NHT, DEQX (Digital Equalization and Crossover), and PowerPhysics — that pooled their respective core technologies to develop a system that removes virtually all possible distortion from the audio signal path while providing a much wider soundfield that remains accurate, even when listening far off axis. The system features two small speaker cabinets; a powered bass, or woofer module; and a hybrid outboard component that houses the DEQX-calibrated DSP (digital signal processor) and PowerPhysics One-Cycle Sound amplifiers. Additional channels and bass modules can be added to create surround systems.

Just as the NHT Xd is the offspring of three companies’ design efforts, the system itself is comprised of three essential components.

Capitalizing on the proven benefits of DEQX CalibrationTM, the NHT XdA DSP/amplifier is the “brain” of the system. Designed to be a truly plug & play solution, the NHT XdA includes only a
few intuitive controls: one for each channel, allowing the end-user to set boundary equalization, i.e. an adjustment for maximizing performance when speakers are placed on or next to a wall, on a stand in the middle of the room, on a TV, etc. There are two sets of inputs — RCA and differential balanced (XLR) — as well as outputs in the form of five-way binding posts, four for each channel, with balanced line level outputs for connecting bass modules.

The diminutive (10.25″H x 6.5″W x 8.5″D) NHT XdS satellite speaker features a two-way, acoustic suspension design that houses an ultra-low distortion 5.25″ midrange and 1″ neodymium tweeter. A massive “heat sink” is attached to the rear of the tweeter to provide substantial power handling, while the cabinet baffle itself is molded from a dense, sonically neutral composite material designed for far-reaching sound dispersion. Each satellite is bi-amplified, with the midrange and tweeter each powered by an individual amplifier.

Rounding out the NHT Xd system is the NHT XdW powered bass module, comprised of two active, opposed 10-inch drivers and a PowerPhysics 500W amplifier. Unlike other powered woofers, the XdW features only three controls — volume trim, balanced input, and voltage selection. (Crossover functions such as frequency response, phase, crossover point, and time domain filtering are managed by the XdA.)

In the near future, NHT will offer a backwards compatible, wireless (digital 2.4GHz transmission) option for the bass module, in addition to the wired input. Additionally, the NHT Xd system is designed to be upgradeable, so end-users will be able to augment their systems as new DSP-based functions are introduced.