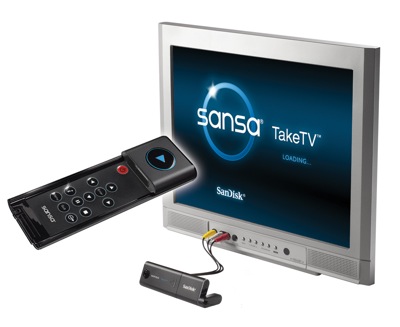 Under the terms of the deal, SanDisk plans to use their security expertise in collaboration with NBC Universal to implement a series of measures to protect NBC Universal content, including partnering to explore the implementation of watermarking and filtering technology solutions. A watermark is a unique identifier in content that enables rights management by content owners. Additionally, NBC Universal and SanDisk will collaborate on new consumer content acquisition models, including flexible pricing and packaging. NBC Universal will provide Fanfare BETA users with a variety of attractive ways to purchase and view TV shows, including offering discounts for multiple episode purchases and entire seasons, as well as incentives to purchase a bundle of different TV shows at one time.

NBC Universal content will be available on Fanfare (currently in BETA) in January. Hit NBC shows will be available on Fanfare for consumers to purchase and permanently download and view on a TV via SanDisk’s new Sansa TakeTV PC-to-TV video player. Shows will include the Emmy Award-winning series “The Office,” the critically acclaimed drama “Heroes,” and Emmy Award-winning comedy “30 Rock.” New episodes will be available on Fanfare the day after they air on the network. Consumers may also purchase NBC Universal’s popular series, specials and sports from properties such as USA Network, SCI FI Channel, Bravo, Telemundo, mun2, NBC Sports, and NBC News, including USA Network’s Emmy- and Golden Globe Award-winning “Monk,” SCI FI Channel’s Emmy-nominated “Battlestar Galactica,” Bravo’s Emmy-nominated “Top Chef,” as well as NBC News and NBC Sports specials. Additional series, specials and episodes from NBC Universal’s networks will be added to Fanfare regularly.

“Our viewers now have another innovative way to enjoy NBCU’s first-rate broadcast and cable content whenever and wherever they choose with Fanfare and Sansa TakeTV,” said Perrette. “SanDisk is taking a leadership position within the consumer electronics industry with its commitment to protecting content, which marks an important advance for television entertainment in the digital landscape.”

“SanDisk’s partnership with NBCU is significant because it gives us the ability to distribute a wide variety of additional premium hit TV content to consumers via Fanfare,” said Mehrotra. “SanDisk is committed to providing consumers a vast collection of legitimate content, while protecting the rights of content owners with technology solutions such as watermarking.”

The combination of Fanfare with Sansa TakeTV creates a unique, end-to-end entertainment system where viewers can enjoy their favorite shows at their leisure by downloading them from their PC to watch on nearly any TV, at any time. Fanfare video content is a combination of free (ad supported) and paid episodes. SanDisk is in the process of adding new episodes from current partners to the catalog, and expects to acquire additional distribution rights to other premium content and channels.

The Sansa TakeTV device must be purchased to extract content from Fanfare and transfer it to a television for playback. To learn more about Fanfare or to access content for use with a Sansa TakeTV video player, visit http://www.fanfare.com.

About SanDisk:
SanDisk is the original inventor of flash storage cards and is the world’s largest supplier of flash data storage card products, using its patented, high-density flash memory and controller technology. The Company has been the second largest manufacturer of MP3 players in the United States since November 2005. SanDisk is headquartered in Milpitas, Calif., and has operations worldwide, with more than half its sales outside the U.S.