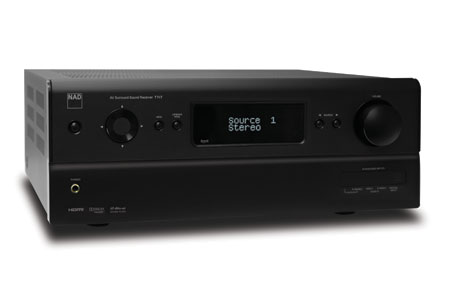 The T 747 includes the newest lossless audio CODECs from Dolby and DTS, including TrueHD and DTS HD Master Audio, so that even discs lacking a TrueHD will benefit from the higher bit rates and discrete 7.1 channels supported by Dolby Digital Plus. An Auto Calibration function using a special microphone and test tone makes speaker set-up easy and highly accurate.

High quality AM and FM tuners offer 50 station presets, as well as XM (120V) or DAB (230V) Ready sockets for clear access to these digital broadcasts using NAD’s XM or DB 1 adaptors. The T 747 also supports NAD’s optional IPD 1 and IPD 2 Docks for iPods, allowing audio, video and images stored on an iPod to be played directly on an NAD Home Theater.

On the video side, the T 747 fully support signals up to 1080p resolution from HD set-top boxes and Blu-ray players, and includes 4 HDMI inputs with a repeater function that automatically passes along the HDMI signal after stripping the audio portion. It’s capable of ‘upscaling’ older analog video formats to digital HDMI output, and standard definition signals to HD using award-winning Faroudja DCDi technology.

The T 747 offers a second independent A/V zone along with all the connections needed to integrate the receiver with advanced control systems. Two remote controls are included, one for the primary listening zone and one for the remote zone. The main remote also controls other NAD components, simplifying system operation. 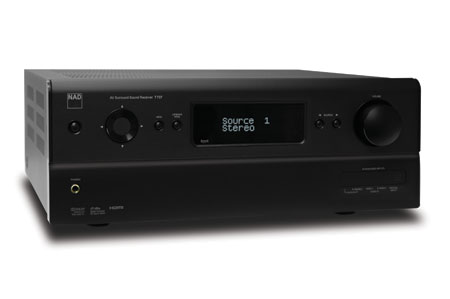 NAD’s new T 737 A/V Receiver
The T 737 AV Receiver uses a system of ‘virtual inputs’ that allows each user to perfectly customize its set-up. Select an input, name it, associate it with any video and audio source, analog or digital, and carry on until there’s an input for each source in the system. Unused inputs can be tucked away. Additional customization can be added for different speaker set-ups, levels, tone controls and surround modes.

The T 737 delivers 40 watts to each of seven channels. Its three surround modes automatically cater to multichannel-encoded DVDs using Dolby Digital EX and DTS ES, encoded two-channel recordings with Dolby ProLogic IIx and DTS Neo:6, and NAD’s own EARS and Stereo Enhanced modes, which are perfect for creating convincing surround sound from unencoded sources like CDs.

In addition to high quality AM and FM tuners offering 50 station presets, the T 737 offers XM (120V) or DAB (230V) Ready sockets for clear access to these digital broadcasts, The T 737 also supports NAD’s optional IPD 1 and IPD 2 Docks for iPods, allowing audio, video and images stored on an iPod to be played directly on an NAD Home Theater.

Video quality is also first rate, whether the source is the Composite or S-Video or higher performing Component Video. HDMI signals are simply switched without any extraneous processing or loss of quality.

Both receivers use less than one watt for standby power consumption, in keeping with NAD’s green initiative, and no heavy metals or hazardous chemicals in their manufacture.

The T 747 and T 737 AV Receivers will be available in January and February 2009 respectively from authorized NAD dealers at suggested prices of $1,299 and $799. They can be seen with other outstanding NAD products in Suite 31-110 at the Venetian Hotel, during CES.