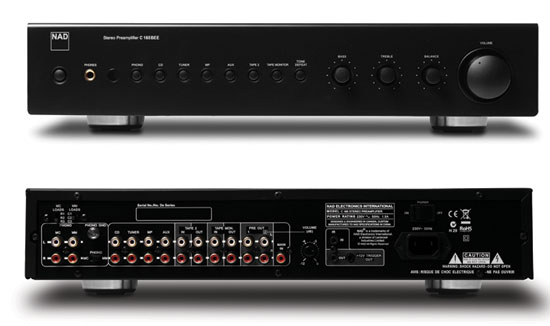 The two components display attention to the minutest details, from their heavy gauge steel chassis and sophisticated power supplies to refinements straight from NAD’s acclaimed Masters Series components. Taken together, their improvements deliver the kind of high quality performance that must be heard to be fully appreciated.

In addition: The Class A gain modules combine the short signal path advantage of IC-based OPAmps with the higher signal and current capacity of discrete transistors. SMDs are used to miniaturize the circuit, while an extruded aluminum heat sink keeps all parts at the optimal operating temperature for ultra-low distortion. NAD’s unique development endows the C 165BEE with lightning-fast transient response, and bass extension and definition uncommon at its price level. High frequencies are extended, silky smooth and grain-free.

Unlike many high-end preamps that skimp on inputs, the C 165BEE is exceptionally versatile and ready to integrate with custom-installed control systems. Connections and controls include 6 line level inputs, a subwoofer output, an MC/MM phono input, a 12-V trigger output, IR inputs and outputs on the rear panel, discrete On/Off codes, a superbly designed tone control circuit ideal for touching up the tonal balance of less-than-perfect recordings, a Tone Defeat switch, and NAD’s SR 8 full-function remote which also controls other NAD components.

The C 275BEE Stereo Power Amplifier
The C 275BEE delivers 150 Watts to each of two channels at 4 and 8 ohms continuous power, and 250, 410 and 600W IHF dynamic power at 8, 4 and 2 Ohms, respectively. The power can be heightened to 400W to two channels by bridging the C 275BEE with a second C 275BEE into a ‘dual mono’ pair in which each channel and speaker is totally isolated from the effect of the other.

The C 275BEE also boasts many of the refinements found in NAD’s highly acclaimed NAD Masters Series M3 Amplifier, including an application in the output stage of Bjorn Erik Edvardsen’s innovative and patented Distortion Canceling Circuit, and his BEE Clamp in the power supply. An improved tone control circuit and revised PCB layout reduce distortion and noise to unprecedented levels. NAD’s ATO Logic circuit, which includes a 12V-trigger system and signal-sensing turn-ON option, makes it easy to integrate the
C 275BEE into automated control systems.

NAD’s PowerDrive™ technology allows the C 275BEE to deliver maximum performance under virtually any circumstance, and with any speakers. PowerDrive automatically senses a speaker’s impedance characteristics and adjusts its power settings for the specific load. It deals easily with difficult speaker loads, providing high dynamic power and low impedance drive capability in an affordable package.

The C 275BEE has the lowest levels of distortion and noise in its price class, making its performance comparable to far costlier products. Noise and distortion mask the fine details of recordings, replacing musical texture and dimension with non-musical artifacts — which is why NAD has spent 35 years perfecting its designs to achieve the lowest distortion and highest power at their price levels.

Both the C 165BEE and the C 275BEE are also environmentally responsible, manufactured according to stringent international standards, without the heavy metals identified as environmentally hazardous, and drawing less than 1 Watt in standby power.