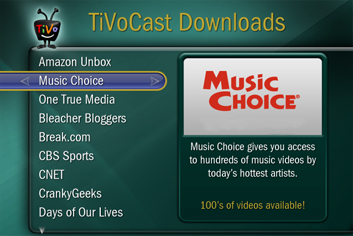 TiVo (NASDAQ: TIVO), the creator of and a leader in television services for digital video recorders (DVRs), and Music Choice, the award-winning multi-platform music network, today announced the immediate availability of Music Choice on broadband-connected TiVo DVRs. Music Choice will deliver its wide-ranging catalog of several thousand music videos and original programming to the television through the TiVoCast service. At launch nearly a thousand video titles are available and this number is expected to grow significantly in the coming weeks.

“Be it music, movies or memories, our broadband strategy continues to focus on delivering consumers what they want, when they want it,” said Tara Maitra, Vice President and GM of Content Services for TiVo Inc. “By bringing TiVo users Music Choice, we’re giving our subscribers access to the most extensive music offering available, delivering thousands of music videos straight to the TV. We think this service will be extremely popular among the TiVo audience.”

“We are thrilled to make our highly-popular music-related content available to TiVo users,” said Christina Tancredi, Executive Vice President of Music Choice. “This exciting relationship with TiVo allows us to extend the reach of our content to even more consumers across the country, and we’re confident once TiVo users try it, they’ll be hooked.”
By combining the TiVo interface with Music Choice content, TiVo has quickly emerged as the entertainment platform for music lovers. TiVo subscribers will be able to browse through a variety of music genres using TiVo’s easy-to-use and intuitive search interface, breezing through Music Choice content, featuring Rock, Pop, Hip Hop, R&B, Country, Latino, and Kids’ videos, Music Choice Originals featuring today’s hottest established and emerging artists, as well as daily entertainment news clips.

When considering the robust Music Choice offering and the recently announced availability of Rhapsody, with the current Internet radio offering from Live365, TiVo users truly have a 360-degree musical playground. Users can conceivably watch a documentary about an artist, add the artist to a playlist for their mobile device and then watch that artist over and over via music video.

Legendary VJ and music personality Martha Quinn has been at the forefront of music entertainment since her days as one of the most recognizable VJs in the world, and is one of many music lovers excited about the new feature on TiVo.

From the time I started as a VJ, one thing has been obvious — music fans love to see their favorite artists via videos,” said Quinn, one of the first MTV VJs and now host of a popular Sirius satellite radio music show. “In a way, I see this as a new video revolution whereby fans pick the videos they want to watch and when, both saving and creating the video stars of today. TiVo and Music Choice have delivered exactly what fans have been asking for.”
All of the content on TiVoCast, including Music Choice, is offered at no additional charge as part of the existing TiVo service subscription fee. TiVo subscribers can access TiVoCast content through TiVo Central.

About TiVo Inc.
Founded in 1997, TiVo (NASDAQ: TIVO) pioneered a brand new category of products with the development of the first commercially available digital video recorder (DVR). Sold through leading consumer electronic retailers, TiVo has developed a brand that resonates boldly with consumers as providing a superior television experience. Through agreements with leading satellite and cable providers, TiVo also integrates its full set of DVR service features into the set-top boxes of mass distributors. TiVo’s DVR functionality and ease of use, with such features as Season Pass™ recordings and WishList searches and TiVo KidZone has elevated its popularity among consumers and has created a whole new way for viewers to watch television. With a continued investment in its patented technologies, TiVo is revolutionizing the way consumers watch and access home entertainment. Rapidly becoming the focal point of the digital living room, TiVo’s DVR is at the center of experiencing new forms of content on the TV, such as broadband delivered video, music and photos. With innovative features, such as TiVoToGo™ transfers and online scheduling, TiVo is expanding the notion of consumers experiencing “TiVo, TV your way.” The TiVo service is also at the forefront of providing innovative marketing solutions for the television industry, including a unique platform for advertisers and audience measurement research. The company is based in Alviso, Calif.

TiVo, Season Pass, WishList, ‘TiVo, TV your way.’ and the TiVo Logo are trademarks or registered trademarks of TiVo Inc. or its subsidiaries in the United States and other jurisdictions. (c) 2007 TiVo Inc. All rights reserved.