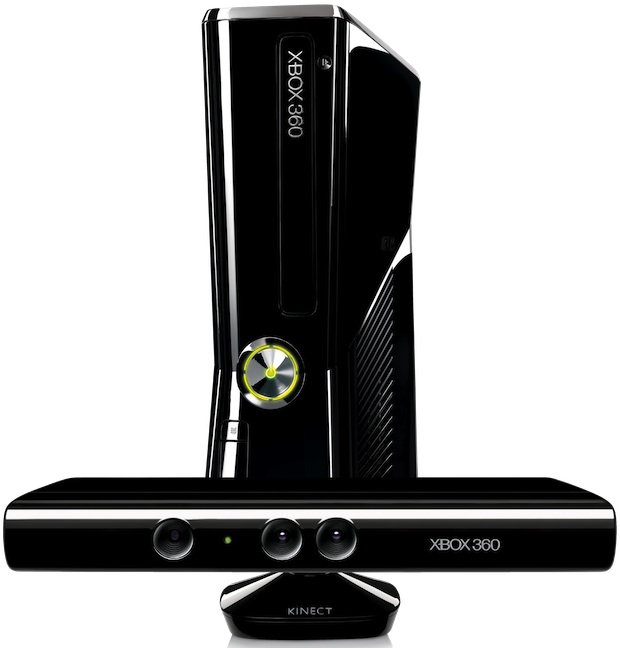 Microsoft just announced a new Xbox 360 console designed for the future. Back in black, the new Xbox 360 is sleek, silent and sexy. Connect in seconds to the always- expanding world of Xbox LIVE through built-in Wi-Fi N and store twice as many games and entertainment on a 250GB hard drive.

The newly designed console is whisper-quiet, so the silent tension of a game or movie is never broken. The new Xbox 360 system also comes with everything you need to get started, including an Xbox 360 wireless controller, Xbox 360 headset, HDMI output, USB flash drive storage capabilities and more, and a one-year limited warranty on the console, available this week and priced at $299.99 ERP.

The Year We All “Kinect”
Kinect for Xbox 360 brings roaring rapids, wild tigers, mountainous obstacle courses and zooming racecars to living rooms in North America on Nov. 4 and will roll out to the rest of the world thereafter. Uniquely magical and instantly fun, Kinect for Xbox 360 tracks your body movements and gestures. It even understands your voice.

By taking technology out of your hands for the first time, Kinect lets people who have never picked up a game controller join the excitement. See a ball? Just kick it. Want to learn how to dance or get fit? Just follow the moves. With Kinect, all you have to do is be you — no controller required.

Kinect also puts your favorite movies, television shows and music at your fingertips, turning ordinary entertainment into an extraordinary experience.1 Jump right into a movie in instant-on 1080p HDTV2 by simply saying “Xbox, play.” Browse a selection of millions of songs with just a wave of your hand. Kinect instantly makes playing games, watching movies and listening to music more fun and interactive than ever before, and it is available only on Xbox 360.

Xbox LIVE connects you and your Xbox 360 to a world of fun, friends and interactive social entertainment, with the best in games, movies, TV, music, sports and community experiences all in one place

With thousands of sporting events on ESPN3.com and the interactive social network of Xbox LIVE, ESPN on Xbox 360 brings the excitement of a stadium experience into the living room. Fans will be able to share the emotion, victory and heartbreak of world-class sports with friends and rivals from coast to coast on Xbox LIVE. They’ll also be able to see what games the Xbox LIVE community is watching, participate in polls, make predictions, play sports trivia and much more. With Kinect, fans control the action from their couches with just their voices or a wave of the hand. A first for home entertainment, ESPN on Xbox 360 brings the action to life like never before in an ultimate interactive experience for sports fans.

Seven million songs at your fingertips
Building on the success of Zune video on Xbox, Microsoft announced the expansion of the Zune music experience to Xbox LIVE, bringing everything you love about music right into the living room. With a Zune Pass subscription (sold separately),4 users can discover and play an unlimited number of songs from a catalog of more than 7 million tracks, all streamed instantly, on-demand and in crystal-clear quality.

Create a playlist for your next party, and watch as the music videos of your favorite artists play in the background. Get personalized song recommendations based on your favorite artists, and see your Xbox LIVE friends’ top songs. Plus, with the power of Kinect, you can control your music with hand gestures and your voice.

Video Kinect
Share a smile and a wave with faraway friends and family as you come together from living rooms across the world, no headset required5. Video Kinect pans to follow your movements and adjusts automatically to make chat on Xbox LIVE more intuitive and easier to use than ever before.}Next year, Microsoft will link Video Kinect with Windows Live Messenger, allowing the Xbox LIVE community to have rich, real-time video conversations with hundreds of millions of PC users around the world. It will also integrate custom news feeds, weather and videos from Bing, sparking conversation just like you’re in the same room reading the paper or watching the news together.

Global expansion
This holiday, Xbox LIVE will roll out service to nine new regions — Brazil, Chile, Colombia, Czech Republic, Greece, Hungary, Poland, Russia and South Africa — delivering the core gaming and community features that have made Xbox LIVE the world’s premier online gaming destination. In addition, Australians will soon be able to watch live television and a range of video-on-demand programming on Xbox LIVE from satellite and cable TV provider FOXTEL with no set-top box required.

The Year of Blockbuster Games
Larger-than-life characters. Emotional storytelling. Groundbreaking gameplay. This year, the Xbox 360 is the only place to play the three biggest blockbusters — “Halo: Reach,” “Call of Duty” and “Gears of War 3.” In addition to these highly anticipated titles, games like “Fable III,” “Metal Gear Solid: Rising” and code-named “Kingdoms” are also on the way.

1 Xbox LIVE Gold Membership required.
2 Users will need an HDCP-compliant 1080p display, an HDMI cable and broadband speeds greater than 3–4 Mbps for instant viewing at 1080p and 5.1 surround sound.
3 ESPN on Xbox LIVE, providing great content from ESPN3.com and ESPN.com, is only available to Xbox LIVE Gold members. For access to ESPN3.com content, Gold members must receive their Internet connection from an affiliated broadband provider. See ESPN3.com for details and providers
4 Zune Pass is a monthly music subscription. Available content may vary over time. Zune Pass is not available in all countries; see Zune.net.
5 Xbox LIVE Gold membership required for Kinect Chat.