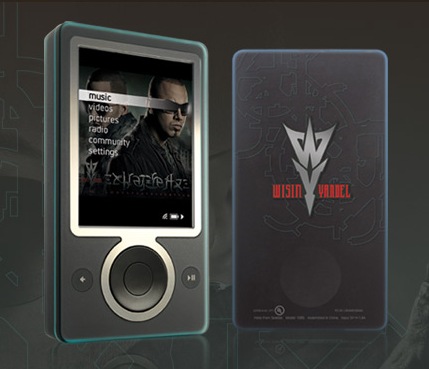 “It was great working with the Zune team to create this custom device and come up with cool ways to promote our new album via their digital music platform,” said Edgar Andino, Wisin y Yandel’s manager. “Connecting with fans digitally is really where music is going, and we’re psyched to have this opportunity.”

The idea to work together resulted from a chance meeting between Wisin y Yandel’s management and Zune executives at a summer concert. Shortly afterward, Wisin y Yandel visited Microsoft’s headquarters to meet with the Zune music marketing team and discuss design concepts for the limited-edition Zune 30GB device.

“Wisin y Yandel are currently one the biggest Latin groups out there, so we are excited to have them customize a Zune device and offer exclusive content to their fans,” said Javier Farfan, multicultural marketing manager for Zune at Microsoft. “Working together like this has helped us to connect Latino music artists with their fans.”

The new Wisin y Yandel Zune is being introduced as the band prepares to release its new album on Nov. 6. The collaboration between Microsoft, Wisin y Yandel, Machete Music and Wal-Mart includes the following:

“It’s very important to let Latino audiences know they can trust Zune to deliver the music and digital experiences they want to tune into,” Farfan said. “Working with Wisin y Yandel, we have taken an innovative and authentic step to connect with Hispanics.”

The limited-edition Zune will go on sale exclusively at Wal-Mart retailers Oct. 29 for $199 (ERP) and is available for pre-order at http://www.zune.net/wisinyyandel.