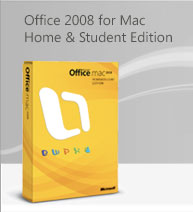 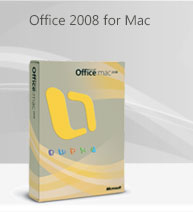 All versions of Office 2008 for Mac support the new Open XML file format and are Universal applications that will perform natively on Power PC- and Intel-based Macs. Each version will be available in Dutch, English, French, German, Italian, Japanese, Spanish, Swedish, and, for the first time, in the Nordic languages (Danish, Finnish and Norwegian).

“We built Office 2008 with the unifying goal of making it easier for Mac users to access the tools they need to get the job done — whether it’s creating a brochure for their business, managing their family schedule and finances, or finalizing a presentation to share between Macs and PCs,” said Craig Eisler, general manager of the Mac BU at Microsoft. “And, of course, Office 2008 for Mac will provide the document fidelity with the 2007 Microsoft Office system that our users need to stay connected with their friends and co-workers on PCs.”

Delivering the Industry Standard
Office 2008 for Mac features a leading suite of applications that Mac customers rely on to get their work completed with Word 2008, Excel 2008, PowerPoint 2008, Entourage 2008 and Microsoft Messenger for Mac. Mac users can simplify their day by using powerful new tools and easily located classic Office for Mac features.

As showcased at Macworld Expo 2007, Office 2008 for Mac is designed to help users get more from their Macs by making key functions accessible through a more intuitive design and by introducing smart features such as Ledger Sheets in Excel 2008, My Day with Entourage 2008, Publishing Layout View in Word 2008 and SmartArt graphics in PowerPoint 2008 that are simple to use and yield powerful results. Entourage 2008 also features improved Windows Exchange Server support, with enhanced reliability and functionality.

“We’ve worked closely with Microsoft since it launched the first version of Office for Mac more than 20 years ago,” said Ron Okamoto, vice president of Worldwide Developer Relations at Apple. “Office delivers tremendous compatibility across platforms for Mac and PC customers, and we look forward to another great user experience with Office 2008 for Mac.”

A Suite to Meet Every Need
The Mac BU will offer two versions in addition to Office 2008 for Mac that meet distinct user needs:

Today also marks the start of the technology guarantee program that allows customers in select regions who purchase qualifying Office 2004 for Mac product(s) to upgrade to a version of Microsoft Office 2008 for Mac for only the cost of shipping, handling and applicable taxes. More information about the program specifics in various regions is available at local Office for Mac Web sites.

products include Microsoft Office 2004 for Mac, a productivity suite that includes the e-mail application and personal information manager Entourage 2004, Word 2004, Excel 2004, PowerPoint 2004 and Messenger for Mac 6.0. More information about the Mac BU and Microsoft Macintosh products is available at http://www.microsoft.com/mac.

* All prices are estimated retail prices and may vary by retailer.