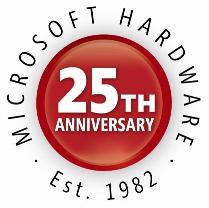 What began in 1982 with a Microsoft Mouse designed to easily navigate Microsoft Corp.’s first version of Microsoft Word has grown to an extensive lineup of innovative, indispensable products for today’s computer-centered lifestyle. Microsoft Hardware is celebrating its 25th anniversary of staying ahead of the computing curve by delivering groundbreaking peripherals that make the software and services experience better and easier. In recent years, Microsoft tapped the Microsoft Hardware Group’s rich heritage of hardware innovation as it developed the Xbox video game system, Zune™ digital media player and the new multi-touch technology breakthrough, Microsoft Surface™.

“The Hardware Group transformed Microsoft beyond just a software company,” said Robbie Bach, president of the Entertainment & Devices Division at Microsoft. “From Xbox to Zune and now Microsoft Surface, the Hardware Group continues to lend its expertise across all Microsoft categories, helping to redefine the consumer expectation of Microsoft products.”

One Click and Software and Services Come to Life
In the same way that the first mouse from Microsoft connected with Microsoft Word, the Hardware Group continues to create easy solutions to manage and access the technologies and products that are shaping the way people use their PCs: Windows Vista, the 2007 Microsoft Office system, Windows Live and Games for Windows titles.

“At Microsoft, we are fortunate to have the ability to integrate across all groups in ways that ultimately make life easier for our consumers,” said Tom Gibbons, corporate vice president of the Specialized Devices and Applications Group at Microsoft. “Whether it’s launching Windows Vista gadgets with the press of a button or making it so simple to have a Windows Live video call with a LifeCam, Microsoft Hardware products truly make accessing software and services a better experience.”

A History of Innovation
Over the past 25 years, Microsoft Hardware has designed and developed a wide assortment of computer peripherals to fit customer needs, from mice and keyboards to webcams, headsets and gaming devices. With products including the world’s first optical mouse, the award-winning Natural line of ergonomic products and the new SideWinder™ Mouse that was announced today, Microsoft Hardware continues to create inventive peripherals that connect to the software and services consumers rely on to make computing easier, fun and more productive.

Numbers That Paint the Picture
Today, the Hardware Group has expanded its portfolio to offer a product line that includes 28 mice, 36 keyboards and desktops, six gaming devices, and eight products for Internet communications. The Hardware Group currently ships products in nearly 50 countries around the world and holds these key sales records:

Important milestones from Microsoft Hardware include these:

More information about Microsoft Hardware’s 25 years of innovation — including an interactive timeline, sweepstakes and the 25th anniversary game — can be found online at http://www.microsoft.com/hardware/anniversary.

About Microsoft Hardware
For 25 years, the Hardware Group has employed innovative engineering, cutting-edge industrial design and extensive usability testing to create products of exceptional quality and durability that enhance the software experience and strengthen the connection between consumers and their PC. Microsoft Hardware leads the industry in ergonomic engineering, industrial design, and hardware/software compatibility, offering consumers an easier, more convenient and more enjoyable computing experience. Microsoft IntelliMouse Explorer, which launched in 1999, earned a place on PCWorld.com’s December 2005 list of “The 50 Greatest Gadgets of the Past 50 Years” as the first mainstream optical mouse that “brought gunk-free pointing devices” to a broad consumer base. More information about the Hardware group is available at http://www.microsoft.com/hardware.