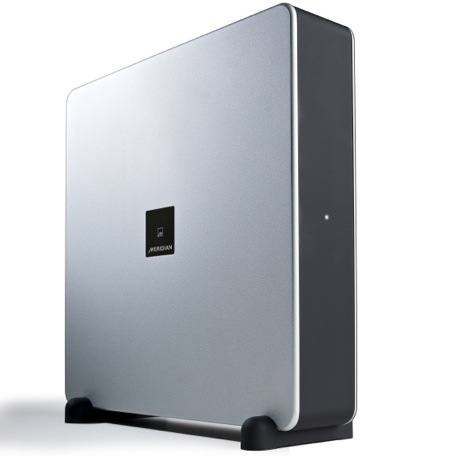 Meridian Audio introduced the Media Core 200, an elegant, compact and virtually silent Meridian Sooloos Digital Media System that requires only your choice of controller to bring it to life. It can be operated by any of the network-based control systems available, including the iPad or iPhone App, a computer running the Control PC or Control Mac application, or a Meridian Sooloos controller such as the Control 15 or Control 10.

At the heart of the Media Core 200 is a 500GB hard drive, storing around 1,000 CD albums in pristine lossless quality for graphical and touch-screen access via the award-winning Sooloos interface.

The Media Core 200 provides a single audio zone which is available digitally via Meridian SpeakerLink and S/PDIF, and also via analogue outputs delivering fixed 2V peak-to-peak or variable output levels. It can thus easily be connected with a single SpeakerLink cable to a Meridian audio system, or via any standard stereo input on a conventional analogue or digital system.

Once connected to a Meridian system via SpeakerLink, the Media Core 200 immediately assumes the role of a Source for Meridian communication protocols, allowing full integration with the Meridian system for control as well as audio, for example allowing centralised control of system volume.

The Media Core 200 also acts as a Core component in a Meridian Sooloos system, automatically locating and integrating itself with other Meridian Sooloos components and stored libraries found on the same network, and ensuring full interoperability.

The Media Core 200 can be controlled by other methods too: the USB expansion ports allow the connection of a Windows Media Centre-compatible IR receiver, widely and inexpensively available, allowing basic functions to be controlled from a standard Meridian MSR+.

A USB expansion port can also be used to interface one of a range of compatible WiFi adaptors to allow the unit to be controlled remotely via a wireless network. (This connection is not recommended for audio streaming between devices.)

The cabinet of the Media Core 200 is unusual for a Meridian device in that it is mounted vertically. This is so that the unit can operate without the use of a fan, employing only convection cooling. This minimises the noise level of the Media Core 200 and as a result allows it to be placed almost anywhere convenient, such as within the listening area. The rear panel of the unit is recessed to hide cable entry.

The enclosure itself echoes that of Meridian’s renowned G Series components, with a finish in bead-blasted and anodised aluminum. The front panel contains a single white multi-function indicator LED. When the unit is powered up (by briefly pressing the sprung rear-panel power switch), this LED pulses repeatedly as the unit initialises and locates the rest of the network. Once it is ready for full operation, the LED remains on. Similarly, the LED flashes during the power- down cycle, initiated in the same way.

The Media Core 200 is intended to operate as part of a stand-alone system, with connection to an audio system and to an Ethernet network (Internet connection is required for functions such as Internet Radio and Rhapsody. In such configurations, the system setup is extremely simple and amounts to little more than “plug and play”. In this case, the Meridian Sooloos Control PC and Control Mac applications can be used to import music from CD and audio files of a wide range of types, as well as controlling the system. It can also be controlled using one of the several other touch-screen and computer-based control solutions available for Meridian Sooloos products, such as the iPad or iPhone application. The unit also offers a basic web browser interface that provides some of the control functionality of the Control Mac/Control PC applications.

The Media Core 200 can additionally be used as part of a larger Meridian Sooloos system, and in this case, some settings may require adjustment. If a Sooloos touch- panel controller such as the Control 10 or Control 15 is available, these parameters may be adjusted using the Device Manager. If not (for example, if the system consists of multiple Media Core 200 units), then a Meridian Sooloos Configuration Application may be downloaded, which provides similar functionality to the Meridian Sooloos Device Manager on a Windows XP or later computer system.

Price and Availability
The Meridian Media Core 200 Sooloos Digital Media System is available from January 2011 for £2,000.