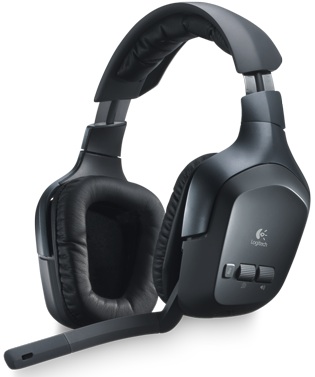 The Wireless Headset F540 includes a wireless base station with three analog inputs — making it easy to connect up to three audio devices, including your PS3, Xbox 360®, TV, DVD player, Logitech Squeezebox, MP3 player or other sources.

All the controls you need are right on the headset — including independent voice and game volume levels, microphone mute, and an input selector that lets you switch between any connected audio source without leaving the couch. For your comfort and convenience, the noise-isolating, over-the-ear design and adjustable padded headband give you an immersive experience and a comfortable fit.

The Logitech Wireless Headset F540 uses 40-mm laser-tuned drivers to deliver detailed stereo sound. And the noise-canceling microphone means you can chat and be heard clearly in your favorite PS3 and Xbox 360® online games.

Logitech's 2.4 GHz digital wireless connectivity delivers gaming-grade wireless performance and frees you from living-room tangles. And there's no need to replace batteries — the Logitech Wireless Headset F540 is rechargeable, delivering up to 10 hours of play time on a single charge. If you do run low on power, you can recharge while you play. (Actual battery life will vary with use, settings and environmental conditions. Rechargeable batteries have a limited number of charge cycles.)

Pricing and Availability
The Logitech® Wireless Headset F540 is expected to be available in the U.S. in October 2010 and in Europe in November 2010 for a suggested retail price of $149.99.