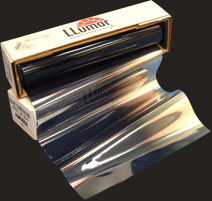 As wireless devices make data access and exchange more convenient, the potential for hackers to steal wireless signals with simple eavesdropping devices is greater than ever. To address this growing risk, CPFilms Inc., a unit of Solutia Inc. (OTCBB: SOLUQ), announced today that it is introducing LLumar Signal Defense Security Film, a high-tech clear window film for businesses and high net-worth individuals looking to secure and protect the confidentiality of their wireless and other “free-space” electronic communications. The film is ideally suited for industries where securing confidential information and protecting data is paramount – such as retail, healthcare, and the financial services industry.

Patented technology built into LLumar Signal Defense film reduces electronic signal leakage through windows, a building’s point of least resistance, by serving as a transparent barrier that allows light to pass through, while minimizing transmission of wireless (WiFi), radio frequency (RF), and other electronic signals.

Over the past several years, CPFilms has manufactured this high-tech, patented window film for the federal government. The film has been installed on more than 200 buildings within various federal agencies, including the Department of Defense, Department of the Treasury, and Department of State, as well as at facilities within the executive branch and at residences of senior government officials.

“With the proliferation of mobile communications technologies like cell phones, PDA’s, Bluetooth devices and Wi-Fi enabled laptops, the airwaves are more flooded than ever with sensitive and confidential information, creating a prime threat for businesses of all sizes,” said Arthur Money, former U.S. Assistant Secretary of Defense for Command, Control, Communications and Intelligence. “Surprisingly, while businesses spend millions on computer and IT network security, they underestimate the risk of electronic signals from cell phones, wireless networks, computer terminals, and other devices ‘leaking’ information through the windows of their building.”

According to Money, all electronic devices broadcast RF signals, whether intentionally (cell phones, wireless microphones) or unintentionally (computer screens, hard drives, etc). And whether or not the information is encrypted, it provides a convenient path for information to easily leak out of businesses and homes, making it available to competitors and hackers.

In fact, with a wireless-enabled laptop antenna and some relatively inexpensive electronics, hackers can easily steal wireless and other RF signals. In addition, acoustic signals from conversations and computer keystrokes can be stolen using more sophisticated equipment, such as infrared or laser microphones, from hundreds of yards away.

In addition to effectively reducing RF signal leakage, one version of the window film is designed to eliminate glass fragmentation and has been blast-tested to government standards, enabling windows to withstand significant impact from the outside, keeping employees safe on the inside.

Developed in conjunction with the U.S. Department of Defense and CPFilms’ technology partner, ASTIC Signals Defenses, the film uses a patented combination of metal and metal oxide layers to reduce the signal strength across the entire electromagnetic spectrum.

“We understand the risks associated with wireless and other ‘free-space’ communications that government entities and businesses face every day,” said Kent Davies, president of Solutia’s CPFilms business. “LLumar Signal Defense Security Film brings our patented technology, available only to the federal government until now, to businesses and commercial organizations for the first time. No other film manufacturer offers optically clear window films with these benefits to either the public or private sector.”

“Importantly, our product also serves as a barrier that protects businesses against excessive electromagnetic interference from outside sources that can disrupt, inhibit, and, in some cases, completely shut down basic, everyday electronic communications,” Davies added. “In fact, most insurance policies don’t protect against data lost due to electromagnetic interference, so the investment in window film may be the best way a business can protect itself.”