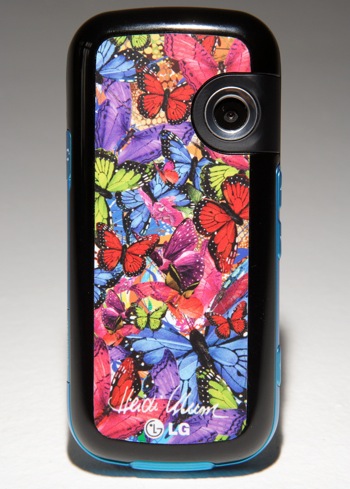 LG Electronics MobileComm U.S.A., Inc. (LG Mobile Phones) today announced an exclusive partnership with fashion icon Heidi Klum to promote the LG Rumor2 phone and the idea that mobile phones have become an expression of personal style. As part of the partnership, LG is unveiling personalized back plates for their recently released LG Rumor2, which is available exclusively through Sprint PCS. Heidi Klum, in her role as LG’s Ambassador of Style, lent her expertise to design five back plates and skins that express her personal style. Like Heidi, consumers can express their individual style and unique personalities by customizing their LG Rumor2 phones.

The partnership includes an advertising campaign, online webisodes, and a consumer promotion. The eight webisodes will be hosted by Heidi Klum and will live on www.lgrumor2.com. Here, aspiring fashionistas will have the opportunity to win a seat at Heidi’s Style Council where they will design the next LG Rumor2 back plate. They will be judged on their creativity and design execution. The winner will have their design featured in the exclusive collection, alongside Heidi Klum’s creations.

“Our partnership with Heidi Klum is an indication of LG’s leadership in style and self expression,” said Ehtisham Rabbani, vice president of product strategy and marketing for LG Mobile Phones. “We are delighted to have Heidi share her vision and creative input. The Rumor2 is not about a one-style-fits-all approach, but about individual style.”

Consumers can win Heidi Klum’s limited edition butterfly design back plate by logging onto www.lgrumor2.com. Additional Heidi Klum back plate skin designs are available for $9.95. For many consumers, mobile phones have become an extension of their personal expression. For those individuals, LG is offering an online interactive canvas to engage and inspire consumers to create their own Rumor2 skins to purchase.

The LG Rumor2 print ad will launch on April 24th nationally. The ad features Heidi Klum painted with butterflies to match her own created black plate demonstrating how the phone is an extension of her personality. The ad will be featured in weekly magazines as well as fashion driven monthlies. Banner ads will also feature the image.

To celebrate the partnership, Heidi will host an LG exclusive party later this month in Hollywood, CA to promote personal style and the LG Rumor2. Guests of the party will include stylists, fashionistas and celebrities who embody the essence of style and personal expression.

The Rumor2 was launched in March of 2009 and available through Sprint network carriers. LG is proud to offer consumers the Rumor2, which is an updated version of one our most popular messaging devices, the Rumor.