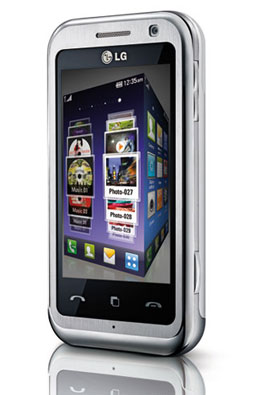 Since the official unveiling of the new LG KM900 Arena phone at the Mobile World Congress event of 2009 the anticipation surrounding the release of this new touch screen device has been building, finally the LG Arena was made available to consumers on the T-Mobile network operator in February and now this amazing new handset has got a second network partner.

The release of the LG Arena on Orange further expands the number of pay monthly tariffs available to consumers, this is extremely helpful when trying to match their usage requirements to a set number of inclusive minutes and text included in their tariff.

The launch of the LG KM900 Arena on this second network also means that there are now more free gift packages to choose from, consumers can opt for a free Sony PSP Slim or even a Nintendo Wii console free with their new LG Arena when connecting to a pay monthly contract deal.

LG has always tried to satisfy various needs of its customer in terms of mobile technology. It has from time to time launched various mobiles with specifications to cater the specific needs of the user. This time LG has brought a mobile that will be a treat for those who are looking for style along with the technology. It is the new LG Arena phone. This mobile is an excellent combination of technology and the style. The features of it are outstanding and can compete with any of the high end model available in the market.

LG Style:
The people for whom style matters the LG Arena will be the best choice. Its metallic design may take you back to the memories of Samsung i900 Omnia but Arena has much more in it. When talking in terms of style quotient it can beat any of the present models with its features:

The 3D UI: the S Class 3D user interface of the Arena makes you the owner of the technology that none other company or mobile phone has in it. The new S Class UI gives you the access to the 3 dimensional cube style interfaces that rotates on the screen for your easy navigation. Its gives you the wider choice of his menu as the multiple faces of the cube are visible at a time. The scrolling of the fingers on the reel rolls helps you to select options very easily and smartly. Its wide touch screen of 3 inches with resolution count of 480X800 pixels facilitates the better and bright view of the images. Thus you can use the 3D S Class UI to flaunt your style and ease.

The Body of the LG KM900 Arena: The Body of the phone adds up to its style. It is made sleek with a refined metal that gives it a smart look. There is tampered glass placed over the touch screen that helps to provide durability at one hand and gives sophisticated look at other. The dimensions of the phone in mm is105.9X55.3X11.95 which along with the weight of 105g only makes it easy to grab and go wherever you want. The availability of Arena in black titanium and silver color will add to its stunning look.

Advanced Technology
One of the style features of S Class 3D UI is a technology that is unique to the Arena and is not used by any other phone. The LG Arena also enjoys the tag of being the first global multimedia phone that has the feature of Dolby Mobile which makes the quality of sound just incomparable with any other phone. It has 5 MP of camera that that is loaded with special features of Auto focus and flash. The Arena has advance feature of internet and connectivity that is supported by the presence of Wi-Fi, EDGE, GPRS and other technologies. Beside these it has many other advance technologies that make this phone an excellent choice.

Thus the perfect blend of style and technology meets at the LG Arena KM900 which is a must to have.

The LG Arena has been initially released on T-Mobile and Orange pay monthly tariffs, it is widely expected that this new touch screen phone will be launched on further network providers over the coming days including a Pay As You Go and SIM Free (no contract or network) release shortly.