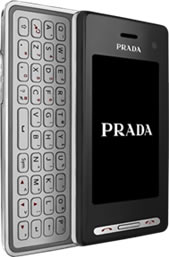 The partnership between the mobile phones manufacturer LG Electronics and the design house Prada has now given birth to the LG Prada 2 mobile phone, a direct upgrade to the original KE850 model this new handset offers new technology and hidden features but retains much of the exterior designing.

The Prada 2 phone which is correctly known as the LG KF900 Prada 2 looks very similar to the original model but the biggest difference is a hidden slide out Qwerty keyboard that takes the emphasis away from pure touchscreen input.

The camera in the new LG Prada 2 has also been upgraded as has many of the phones features, the distinct black outer casing still remains and there is also likely to be a silver edition launched in line with the original offering.

Prada have also launched an elegant, Bluetooth digital wristwatch, known as Prada Link. Crafted from high quality leather and stainless steel, owners can monitor calls and read texts remotely. It’s a useful and glamourous accessory and it is water resistant too so users can keep in touch even whilst relaxing in the a bath or taking a dip.

Following on from the success of the LG Prada comes the eagerly anticipated LG Prada 2 also known as the Qwerty Prada and LG KF900. As this name suggests the handset includes a fully functional and highly innovative Qwerty keyboard that really sets it apart from other fashion phones currently on the market and is sure to make this phone a sure fire hit.

The full keyboard certainly gives the Prada 2 an extra dimension for the user. Now they have the option therefore of using the full touchscreen for their main menu and navigation etc before then just slipping out the kayboard when they want to type text messages etc – it really is a useful addition to have thats for sure.

Aesthetically the LG Prada 2 looks very much the same as its hugely successful predessor but the ultra thin keyboard that slides out from under the handset makes this a completely different animal. Specification wise the Prada 2 has moved on in leaps and bounds and includes a 5 megapixel camera with Schneider-Kreuznach lens, Wi-Fi, HTML browser and Video calling to name but a few improvements.

There was no doubting the success of the LG Prada was largely down to its beauty and elegance but with the release of the Prada 2 LG have backed this up by including a vastly superior specification that will appeal to a whole new market of mobile phone users, adding a real sense of substance to a beautifully stylised handset.

The large touchscreen gives instant access to the multimedia player and it has an FM radio too. Memory is expandable upto 8Gb so storage isn’t a problem for the Prada II.

The LG KF900 Prada 2 has been initially launched on Orange pay monthly contract deals in the UK although it is widely expected that the other UK networks will be picking up this new designer handset over the coming days.