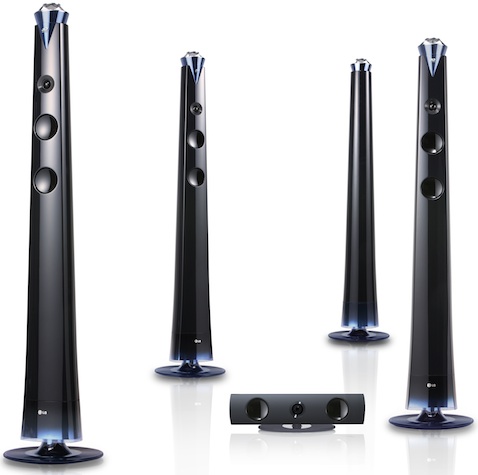 LG announced its first Real 3D Sound Home Theater Speaker System, the HX900 which embraces a completely new concept in home audio to produce a sound as deep and life-like as any 3D image. A Vertical 3D Effect Channel creates audio waves that completely fill the space above viewers' heads, creating the illusion that they're right in the middle of the movie. The dual subwoofers add a powerful undercurrent to the audio, which fills the room with a thrilling, strikingly realistic soundtrack. Completing the experience is the Cinema Dome Effect, which expands the range of the sound field horizontally and vertically, so that viewers are completely blanketed by sound. Complementing its cutting-edge technology, the HX900 comes in a characteristically elegant LG design.

The second part of the 3D sound equation comes in the form of dual subwoofers, which supercharge the bass through two woofer units, rather than the standard one. When placed on opposite sides of the room, the subwoofers add a powerful, room-filling undercurrent to the sound for a thrilling, strikingly realistic.

Completing the experience is the Cinema Dome Effect, which creates the closest thing to movie theatre sound that LG has ever produced. Using advanced digital sound processing, the Cinema Dome Effect expands the range of the audio field horizontally and vertically so that viewers are completely blanketed by sound. Combined, the three innovations don't just make the audio clearer or more powerful, they create an entirely new realm of sound as realistic, powerful and immersive as the most spectacular of 3D films.

“LG's Real 3D Sound Home Theatre System expands the horizons of home entertainment with a sound so rich, expansive and exhilarating that it has to be heard to be believed.”
— Simon Kang, President and CEO of LG Home Entertainment Company