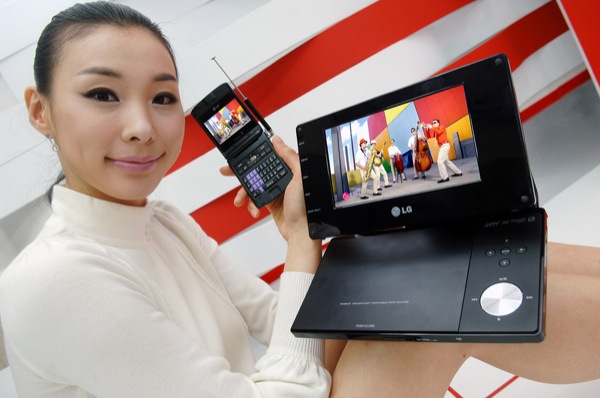 Newly-certified to comply with mobile digital television (DTV) technology now being deployed by American broadcasters, LG Electronics is introducing the industry’s first portable, battery-operated mobile DTV in the United States, designed to receive new rugged over-the-air signals being transmitted by local broadcasters. With hundreds of stations expected to sign on the air using the newly-minted technology in 2010 and with demand for truly mobile, portable TV reception on the rise, LG will officially introduce the DP570MH Mobile Digital Television with DVD Playback here next week at the 2010 Consumer Electronics Show.

“It’s easy to receive Mobile DTV broadcasts with LG’s new Mobile Digital Television set, which comes equipped with a built-in antenna and the ability to play DVD and CD discs. Even on a fast-moving train, a viewer should expect robust reception from favorite local channels – unlike some small digital TV sets currently on the market,” said Tim Alessi, director of product development, LG Electronics USA, Inc.

A First for Mobile Viewers
Ideal for reception of Mobile DTV any time, virtually anywhere, and at any speed, the DP570MH Mobile Digital Television offers the flexibility of both over-the-air reception and the convenience of built-in DVD playback. Equipped with stereo speakers and a 7-inch wide screen to display crystal clear digital TV images (at Wide QVGA resolution of 480×234), the LG Mobile Digital TV is designed so that its display screen can be tilted to the viewer’s preferred viewing angle. When not in use, the clamshell-style screen folds down and the device shrinks to about 9.5-inches by 6.5 inches – or about the size of a small hardback book.

The DP570MH comes equipped to play DVD movie discs and audio CDs, and it can also display .JPG photos and play WMA music files from its USB2.0 connection. The Mobile Digital Television comes equipped with two earphone jacks so that more than one passenger can enjoy Mobile DTV shows or movies in the back seat of the car, or on a train. Equipped with a removable battery that powers the device for up to 2.5 hours in TV mode or up to 4.5 hours during DVD playback, the device includes both AC and Auto power adaptors.

The DP570MH Portable Television with integrated DVD player will be available later this year at a suggested retail price of $249.

Mobile Digital TV: LG’s Latest Innovation
“At every stage of the digital TV transition over the past decade, LG has assumed a leadership role,” Alessi said. We started by shipping giant HDTV projection TV sets, which became the stunning flat-screen LCD and plasma HDTVs that are now the hub of today’s home entertainment systems. We are proud to have sold millions of converter boxes last year for consumers with analog TV sets.

“Now we’re taking digital TV to a whole new audience – the mobile viewer. Whether it’s at the beach house or in the back seat of a car with the kids, viewers want mobile broadcast TV wherever they go, and LG will meet that demand with products like our new mobile DTV-DVD player,” he said.

Co-developer of the technology at the heart of the Mobile DTV standard, LG began mass production of the critical component for Mobile DTV reception – the LG2160A integrated circuit (IC) chip – in June 2009. The latest version, the LG2160R single chip design that includes both the tuner and demodulator, is being released at CES. And, by March 2010, LG plans to release its next-generation mobile DTV chip, the LG2161R receiver IC, which is even smaller, consumes less power, supports various interfaces and provides improved performance.

LG Mobile DTV chips already can be found in a variety of new products being introduced by various manufacturers at CES, from laptop USB accessory receivers to netbooks with integrated Mobile DTV tuners and a range of prototype devices being shown to retailers this week. At CES, LG will demonstrate mobile phone prototype LG handsets as well as in-vehicle prototype products that could be available through automobile dealers or after-market retailers.

Standardized by the Advanced Television Systems Committee and formally adopted as the Mobile DTV standard just 12 weeks ago, the new Mobile DTV standard allows broadcasters to use a portion of the existing 19.4 Megabit-per-second DTV channel capacity to transmit data with extremely robust characteristics suitable for mobile, pedestrian and handheld applications. The Mobile DTV signal is also compatible with 8-VSB DTV, which was also developed by Zenith, LG’s U.S. research and development lab.