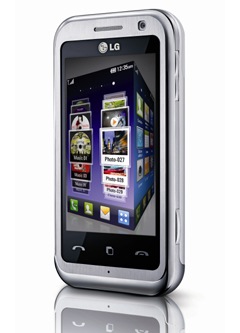 LG Electronics, a worldwide technology and design leader in mobile communications, announced today the launch of its new flagship mobile phone for 2009, LG Arena (LG-KM900). This fully loaded multimedia phone with LG’s innovative and dynamic 3D S-Class User Interface will be on hand at the Mobile World Congress 2009 in Barcelona.

LG ARENA’s groundbreaking 3D S-Class UI was specifically designed to be a more fun and engaging gateway to an amazing multimedia environment. A cube-based layout provides four customizable home screens for direct access to all features. Music, movies, pictures and more are within reach, thanks to intuitive, touch-based 3D menus. The rich 3D graphics give S-Class a life-like look that makes it natural and easy to navigate.

“The direct, intuitive and dynamic S-Class UI will be unlike anything that has appeared on a mobile phone before. With rich 3D graphics, touch sensitivity and exciting multimedia capabilities, it will truly make ARENA a fully loaded multimedia phone,” said Dr. Skott Ahn, President and CEO of LG Electronics Mobile Communications Company. LG ARENA will feature audio and video technologies never before seen on a mobile phone. LG took great effort to ensure that its 2009 flagship delivers an exhilarating multimedia experience, including features aided by Dolby and DivX technologies. LG ARENA will also include enhanced internet connectivity with HSDPA 7.2 networks, Wi-Fi, A-GPS and far more. LG will announce more specifics about ARENA and its features a long with some surprises during a press conference at the Mobile World Congress.