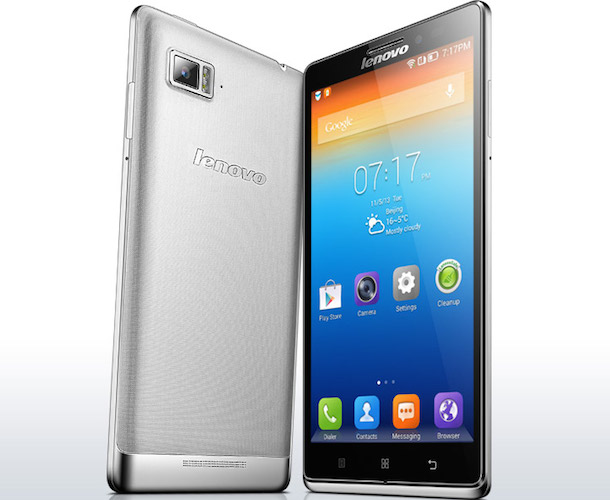 Lenovo today introduced its first LTE smartphone, the Vibe Z, a gorgeous razor-thin, blazing-fast device equipped with gesture controls, photo enhancement software and other premium technologies. The Vibe Z operates on GSM/UMTS networks up to 2100 and also comes with 802.11ac WiFi and Bluetooth 4.0. Its data upload speeds go up to 50 Mbit/s and downloading up to 150 Mbit/s

The Vibe Z comes encased in a thin 7.9mm silver or titanium body weighing just 147 grams. Users will appreciate its laser-etched, fabric-feel rear cover that is comfortable to hold and its 5.5-in full high definition (1920×1080) IPS wide angle viewing touchscreen display. Images appear pin sharp leveraging the Vibe Z’s 20/20 Vision display with a pixel density of 400 pixels per inch. While beautiful on the outside, the Vibe Z packs in superior performance technologies inside starting with its Qualcomm Snapdragon 800 Quad-core 2.2GHz processor to deliver extreme performance for watching movies, capturing and editing photos, multitasking among apps, playing games and video chatting. Loaded with 2 GB of memory, up to 16 GB of internal storage and running Android 4.3, the Vibe Z offers plenty of space for thousands of favorite photos dozens of videos.

Pricing and Availability
The Vibe Z starts at $549 and is available starting in February 2014 in Indonesia, Malaysia, Thailand, Saudi Arabia, United Arab Emirates and the Philippines. USA available unlikely.

Gadgets To Use7 years ago

TechRadar7 years ago
You Are Here