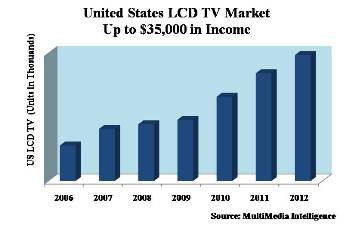 When the 2008 holiday season has ended in the United States, 33.1 million LCD TVs will have been sold to US consumers, according to recent research by MultiMedia Intelligence. However, while the number of LCD TVs sold moving into 2009 will rise, a steep decline in Average Selling Prices (ASPs) will sap 2009 overall revenue growth. Further, market weakness will impact multiple income segments, including households with income below $35,000 as well as households with income between $150,000 and $250,000.

Other key market data from the research includes:

The research, US LCD TV Market & Customer Segmentation provides a deep demographic look into US LCD TV purchases. It analyzes the US market for LCD TVs in terms of:

About MultiMedia Intelligence
MultiMedia Intelligence, a market research and consultancy firm, specializes on the markets and technologies for delivering and monetizing digital content and services across multiple platforms. We look beyond the classic ‘three screens,’ which include TVs, mobile handsets, and computers. We put markets into the broader context of the industry ecosystems that are converging and changing traditional business models.