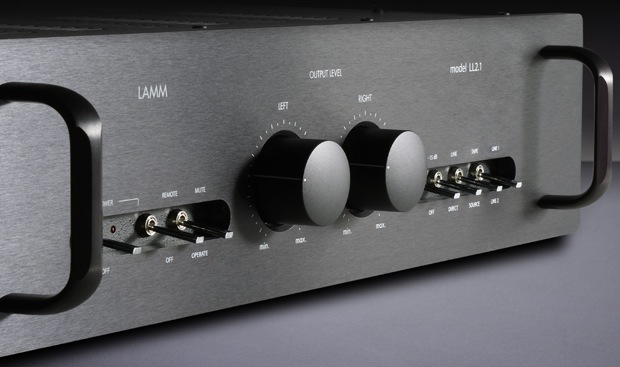 Lamm Industries, Inc. is presenting the LL2.1 preamplifier at this year’s CES. The LL2.1 is a direct replacement for the LL2 preamplifier. The LL2.1 features the following upgrades and modifications as compared to the LL2:

Model LL2.1 is the next generation of the original LL2 which was the first in the line of LAMM vacuum tube preamplifiers. Unique topology and application of the most advanced technological resources and processes bring the LL2.1 very close to the threshold of excellence in sound reproduction. A main distinction of the LL2.1 from any other comparable type of preamplifiers is its almost inaudible sonic signature. When connected to an appropriate type of power amplifiers, especially LAMM amplifiers, it assures the recreation of a three-dimensional soundstage without boundaries and limitations.

The LL2.1 features a topology that brings out the most natural sound performance in the audio path, as well as graceful and sophisticated design. It employs a pure class A operation from input to output; all stages are single-ended. The preamplifier’s audibly neutral power supply features a full-wave vacuum rectifier. This rectifier, together with a choke-containing filter, allows to practically get rid of the hum and buzz and, in the end, to ensure the verity of dynamic range without coloration. Other features include 3 inputs; 1 tape loop; 2 sets of outputs; front panel muting switch; attenuator for gain reduction by 15 dB; built-in remote on/off for LAMM power amplifiers; protection circuitry coupled with automatic mute at turn on/off.

The LL2.1 is available in two versions: standard and deluxe, both of which utilize identical chassis, PC-board and parts. In deluxe version, the power supply energy storage is approximately twice that of the standard version (four identical light-blue capacitors next the choke; only two of these are installed in regular version). Also, in deluxe version, all film capacitors in critical paths are paralleled by polystyrene capacitors of the highest available quality.

Description, images and specs are available at the following links: