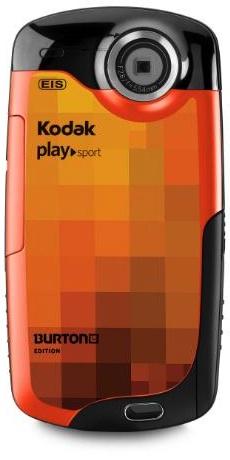 The KODAK PLAYSPORT Video Camera, BURTON Edition will be bundled with gear including a custom Camera Holster that fits around the arm or leg to capture the action, a KODAK Remote Control, a KODAK Lithium-Ion Rechargeable Digital Camera Battery and a KODAK SDHC Memory Card, 4 GB. The product bundle will be available for $199.95 beginning in January 2011 at Burton.com and Kodak.com.

The original KODAK PLAYSPORT Video Camera launched earlier this year is a rugged, durable and pocket-size HD video camcorder with an appetite for adventure. It is waterproof up to 10 feet, offers full 1080p HD video and 5 MP still capture, electronic image stabilization and LCD Glare Shield feature. It also has built-in software and USB cable output so consumers can edit and easily share their videos on social networking sites including YOUTUBE and FACEBOOK, and email.