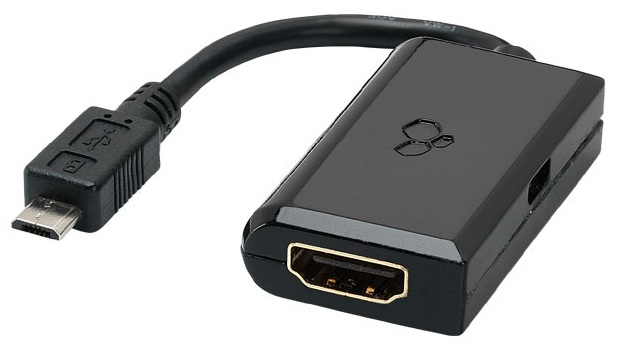 Kanex introduced the MHL HDMI Adapter that mirrors a smartphone screen to a TV. The Mobile High-Definition Link (MHL) adapter bridges a phone's micro USB port to HDMI on the TV, while simultaneously charging the portable device. The HDTV will show the same image from the smartphone or tablet. In MHL mode you can still continue to receive calls, email, view videos, games, photos and other media.

The adapter supports HD video content with up to 1080p/60 picture quality, and digital audio up to 192 kHz, capable of delivering 7.1 channel surround sound from your mobile device.

With companies such as Nokia, Samsung, Toshiba, and Sony using MHL connections on most of their devices, such as the Galaxy S II and HTC EVO, MHL is said to become the new industry standard for audio/video interface to connect mobile phones to HDTVs and displays.

One thing to note is the adapter provides a female interface for HDMI, so an actual HDMI cable is needed to complete the hookup.

Price and Availability
The Kanex MHL HDMI Adapter is available now for $29 at www.kanexlive.com/mhl.