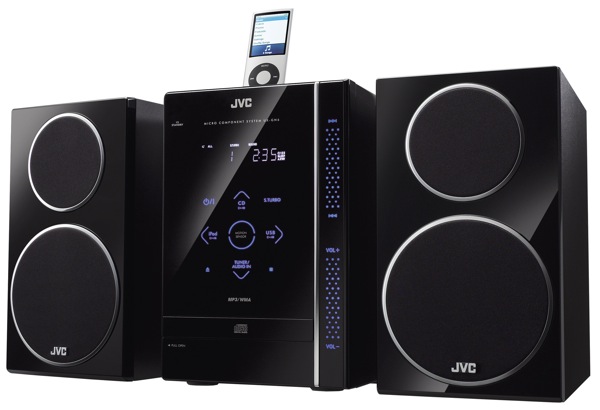 With the UX-GN6, JVC introduces a completely new way to control an audio system. The user “wakes-up” the system from standby mode by waving a hand in front of the system, illuminating all of the controls and the LED display. Another new feature is “laser touch” control of some functions. The system features two laser touch control panels — touch-sensitive illuminated control strips. Running a finger up and down over the strip operates the control. There’s one for volume and another that controls the CD player’s forward/skip and reverse/skip functions. Other functions are handled using touch panel controls.

The system also features a top-mounted iPod dock. A video output allows iPod-stored video to be played through a connected television Other features include USB Host for playback of music files stored on a USB mass storage device, a front audio input for connecting other devices, CD playback and an AM/FM tuner. The UX-GN6 has a total power output of 120 watts and comes with a pair of two-way speakers. All three components are wrapped in a black glossy finish, with the main unit accented by blue illumination of the touch panel and laser touch operation.

Also new for 2009 is the UX-LP5, an audio system that features a retractable front flip dock for iPod. The dock is contained in a damped door that opens gently when pressed. Other features include 70 watts total power output, video output for iPod, two-way speakers, a front audio input for connecting other devices, CD player and an AM/FM tuner. The system is elegantly designed in black with silver accents and blue illumination.

Another new JVC micro system for 2009 is the UX-G200, a desktop system that features a total power output of 16 watts, USB Host, CD player, AM/FM tuner, timer/clock and a front audio input.