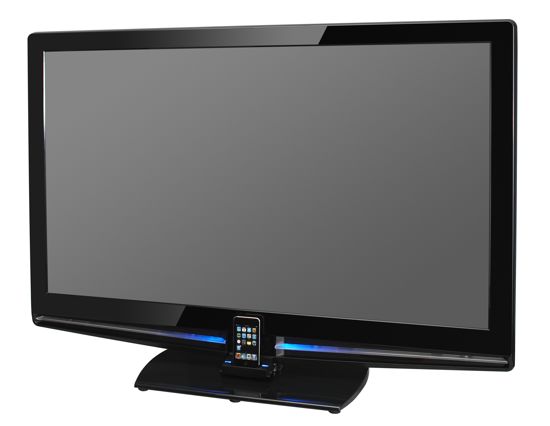 The new three-model JVC TeleDock series is comprised of the:

All models will be available by spring 2010.

Each model includes a flip-down iPod dock at the base of the set, providing a direct connection for playback through the TV. Video files are easily played back on the television, music files can be played through the TV’s sound system with album art displayed on-screen, and photos stored on an iPod can be viewed on the TV. The docked iPod can be controlled from the TV’s remote, which includes a circular keypad with a control scheme that mimics the iPod’s control wheel. In addition, the iPod charges while docked whether the TV’s power is on or off.

When an iPod is docked, a menu appears on the TV screen. The 2010 TeleDock sets display a comprehensive iPod-like menu that allows selection of music or video playback and also supports music search. During video playback, low resolution files, such as internet videos, can be displayed in a small screen mode. Higher resolution video can be shown in nine aspect modes at full screen.

For 2010, the TeleDock line offers the following enhancements: