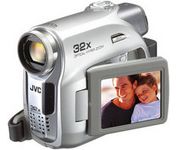 The new line is distinguished by several new features, including selected models with a 32X optical zoom, 16:9 modes and a built-in tele-conversion lens. JVC’s new MiniDV camcorders are easier to use than ever thanks to a new Auto button — just press the button to switch between manual and automatic operation. And all models feature a new on-screen menu system that sorts menu layers by category, making operation easier.

Also offered are already-popular JVC features, such as a data battery that displays time remaining with and without LCD use; live slow, which records in slow motion while retaining real-time audio; JVC’s Auto Illumi-Light for illuminating dark scenes; Power-Linked operation that turns on the power and puts the camcorder in standby mode simply by opening the LCD; and the company’s Clear LCD Monitor that delivers a bright, clear image by reducing reflection and glares, even in bright sunlight.

For 2006, JVC offers four models with a 680K-pixel CCD. In addition, there is a 1.33-megapixel model, the GR-D650, that features a built-in 1.3X tele-conversion lens and JVC’s Low Light Plus — combining an F1.2 lens with the company’s 3D noise reduction that reduces visible video noise by approximately 30 percent and delivers superior low light performance.

Following is a summary of features in JVC’s 2006 line of MiniDV camcorders.