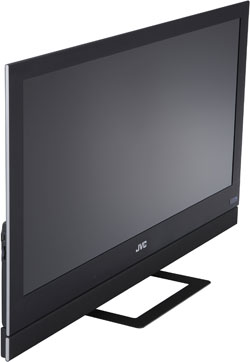 JVC today announced a super slim LCD monitor for home theater use that measures a mere 1/4-inch (6.4mm) deep across most of the panel and weighs just 12.5 pounds (5.7kg). The new 32-inch class LT-32WX50 will be available in the U.S. in November.

The new monitor’s super slim profile is made possible by the use of JVC’s edge LED backlighting system. It offers a 4000:1 contrast ratio and wide color gamut for exceptionally high resolution of both video and still images.
The monitor’s shallow depth makes it ideal for consumers who want the design flexibility such a slim design allows. It also lends itself to a variety of commercial applications. Another attribute is that fewer material resources are used in making the monitor, reducing the product’s environmental impact.

* When measured from the front surface of LCD panel to the rear surface of the cabinet.

About JVC U.S.A.
JVC U.S.A., headquartered in Wayne, New Jersey, is a division of JVC Americas Corp., a wholly-owned subsidiary of Victor Company of Japan Ltd. JVC distributes a complete line of video and audio equipment for the consumer and professional markets.