The camera shoots Full HD 1920 x 1080/60p video at 36Mbps, a bit rate that allows Full HD slow-motion playback, perfect for motion analysis or special effects. Premium performance is further assured by the fast F1.2 lens, 1/2.3” 12.8 megapixel back-illuminated CMOS sensor and optical image stabilization. Five shooting speeds are available, ranging from 120fps to 600fps, easily selected using a dial conveniently located next to the lens. It’s also possible to grab bursts of nine still images from video at the touch of a button, similar to what can be done using the motor drive on an SLR still camera. Other shooting modes for capturing action include high-speed digital still recording at up to 60fps and variable speed time-lapse recording. Zoom Position Memory, ideal for analyzing sports plays, allows quick switching among three angles of view — Full Wide, Full Tele, and a user-settable position in between. Go from full field team formation analysis to a tight shot of a goal being scored, with instant switching of focus, zoom and exposure. 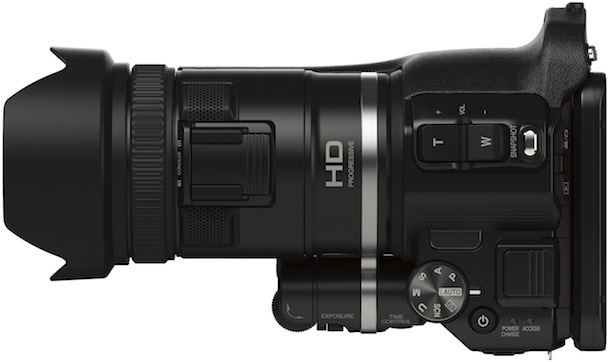 With Wi-Fi connectivity, video and images can be wirelessly sent to and viewed on a smartphone or tablet. And for coaches and others with an interest in analyzing an athlete’s performance, the free “JVC CAM Coach” app for iOS and Android allow annotations to be made on the playback image. Flaws in an athlete’s form can be noted by drawing on the screen and easily seen by both coach and athlete using the large screen a tablet provides, and without the need to disturb the camera setup. There’s also Twin View, which enables simultaneous side-by-side playback of two different video clips after they’re transferred to a tablet, for comparative viewing. A Tagging function allows scenes to be tagged for easy access at any time, and the Scoring function allows the user to record a running tally of a game score as it progresses by tapping on a smartphone.

The GC-PX100 was designed for fast, easy handling, with an SLR-type body and all key controls and functions conveniently placed for intuitive operation. A three-inch tiltable LCD monitor allows high and low angle recording, and an LCD monitor hood is included. An optional color viewfinder is available.