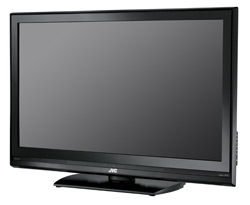 JVC expanded its LCD TV line-up with the addition of four new models that offer 1080p full HD resolution. All four models, in 37-, 42- and 47-inch screen sizes, incorporate an array of JVC technologies that combine to deliver sharp, natural images with even the most challenging program material.

In convenience features, the new sets offer nine video aspect modes, including a full native mode that shows the full picture with no overscan, four picture modes (standard, game, theater and dynamic) to optimize performance for different room situations and program material, and a USB photo viewer — a USB input for connection to a USB mass storage device, including JVC’s Everio hard drive camcorders. Images can be zoomed and rotated, viewed individually or played as a slide show.

New with the launch of these LCD sets is a completely redesigned remote control. All four new sets come with an illuminated universal remote that includes five direct video input buttons, and can be programmed to operate many brands of set top boxes, DVD players, digital video recorders, VCRs and audio products. In addition, the remote features dual infrared transmitters so that the set receives the signal whether the remote is pointed at the TV or held vertically for a better view of the buttons.

The audio package in JVC’s new LCD TVs is comprised of a 10-watts-per-channel amplifier, JVC’s Advanced Hyper Surround for simulated surround sound and twin oblique cone speakers. Also included is JVC’s Smart Sound feature, which maintains a constant volume level as content changes (such as from program material to commercial).