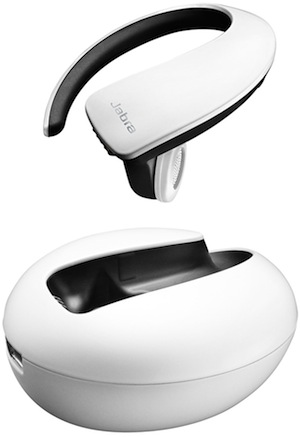 Unique style, comfort, portability and great sound proved the winning combination for Jabra in 2009 with the introduction of the ground-breaking Jabra STONE. Created by GN Netcom, a world leader in innovative headset solutions, the Jabra STONE exceeded sales expectations and received accolades from journalists around the world when it was introduced in Q4. As a result of that success, Jabra and AT&T will soon offer consumers another option – the White STONE. Announced at the 2010 International CTIA Wireless show, a white version of the popular headset will be available only at AT&T retail stores nationwide and online wireless.att.com beginning May 16.

Taking the world by storm since it was introduced, the Jabra STONE is a revolutionary wireless Bluetooth headset that combines style, superior sound quality, ease-of-use and portability. The White STONE will feature the same sleek style and features, once again breaking the mold of what a traditional Bluetooth headset looks like — this time with color.

“We couldn’t be more pleased with the global success the Jabra STONE has achieved and are looking forward to continuing to push boundaries with the introduction of the White STONE,” said Jonas Forsberg, General Manager North America, Mobile Division, GN Netcom, Inc. “AT&T has been a great partner and their success with the initial launch and enthusiasm for the product has been tremendous.”

“The Jabra STONE has been a successful product for us since we launched it in Q4 last year,” said Michael Cowan, AT&T director of accessories, AT&T Mobility & Consumer Markets. “The STONE’s unique shape, in particular, has resonated strongly and we feel that the addition of the White STONE will appeal to an even broader base of our customers.”

Combining visual appeal with advanced technology, the Jabra STONE has a shape like no other headset on the market, elegantly wrapping behind the ear and eliminating the standard on-face microphone, while still featuring Noise Blackout™ Extreme technology. The wireless portable charger functions as a compact carrying case that fits into the palm of your hand — simply plug your headset into the charger and power-up whenever and wherever you want.

Accolades from around the world include such comments as: “One of the best Bluetooth headsets money can buy, particularly for the self-conscious headset wearers out there” (AOL/Switched.com); “…ergonomically sound design and smoking good looks” (PopGadget.net); and “the STONE looks as good as it sounds” (Play Magazine).

The Jabra STONE features discreetly placed controls that are easy to operate. With a nearly invisible touch-controlled volume pad on the outside of the headset, users can simply slide their finger up or down to control the volume while on a call. The STONE also features the Jabra StatusDisplay™, making it easy for users to check battery level and Bluetooth connectivity, and Multiuse™ capabilities to effortlessly connect two Bluetooth enabled devices at the same time. The headset also streams music from A2DP enabled mobile phones. The Jabra STONE comes with both a Micro USB and AC Charger, as well as a belt clip for easy wearing.

The White Jabra STONE will be available for $129.99 at AT&T retail stores nationwide and on wireless.att.com beginning May 16, 2010.