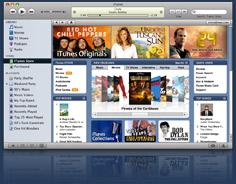 Apple today announced that more than three billion songs have been purchased and downloaded from the iTunes Store. iTunes is the world’s most popular online music, TV and movie store featuring a catalog of over five million songs, 550 television shows and 500 movies. iTunes recently surpassed Amazon and Target to become the third largest music retailer in the US.*

“We’d like to thank all of our customers who have contributed to this incredible milestone,” said Eddy Cue, Apple’s vice president of iTunes.

With Apple’s legendary ease of use, pioneering features such as Cover Flow™, integrated podcasting support, iMix playlist sharing, seamless integration with iPod and iPhone™, and the ability to turn previously purchased songs into completed albums at reduced prices, the iTunes Store is the best way for PC and Mac users to legally discover, purchase and download music and video online.

*Based on data from market research firm the NPD Group’s MusicWatch survey, which captures consumer reported past week unit purchases equivalized so that one CD equals 12 tracks, excluding wireless transactions.